Council Will Spotlight San Antonio Tunes During Meetings, and Musicians Respond with a Chorus of 'Meh'

by Sanford Nowlin and Chris Conde 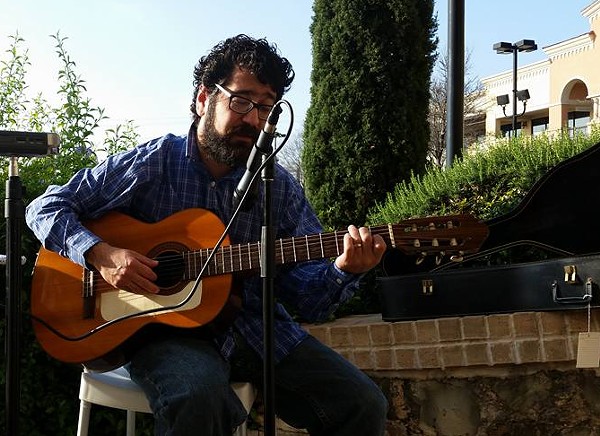 It seems like something musicians would like the sound of — a city program dreamed up by Mayor Ron Nirenberg that promotes local artists by playing snippets of their songs at each Council meeting.

But the newly launched Local Music Spotlight program hasn't grabbed a fan following. At least not yet. Local musicians say they appreciate the city's intent but doubt how much value they'll get from it.

A chief concern is whether the snippet — just 30 to 45 seconds of music played at the start of each Council session — is enough to make any real impression. Plus, the City's not paying for its use.

"I fall into the category of people who think any publicity is good," said Jason Christopher Treviño, who's performed both in bands and as a solo artist in S.A. for 25 years. "But the people who I see benefitting from this aren't really the musicians, it's the politicians who can present themselves as being friendly to local music."

Treviño's skepticism stems from past experience. One of his outfits, the power pop band Rosedale Highs, was featured on a city website several years ago. Even though the page included a link to download more of the band's music, Treviño saw no appreciable boost in traffic.

“If you wanna use our music, pay us,” she said. "Even if it is a $50 H-E-B gift card, we use could use the groceries. That’s bullshit that’s there’s no budget [to pay musicians for use of their music]."

Under Local Music Spotlight, a panel of musicians will select songs from online submissions by local artists. The snippets will play both in the Council Chamber and as intro music for the city's cable access and lifestream broadcasts of the meetings. As in a music video, the name of the artist and the song would appear on the bottom of the screen.

Federico Chavez Blanco will be the first, with his song “Celebration” featured at the Aug. 2, 9 a.m. session. Little surprise here: the song is the official score to S.A.'s Tricentennial and was featured during its New Year’s Eve fireworks display.

The only stipulation for song entries is that music must be an original, by a San Antonio-based artist and free of offensive lyrics. But other than that, the City's open to any genre and lyrics sung in any language.

"We feel like it's a good way to showcase just how diverse music is in San Antonio," said Krystal Jones, San Antonio's film and music commissioner.

That said, it's hard to imagine any panel thinking San Antonio's most grating or experimental musical exports — say, Cannibal Bitch, for example — would make an appropriate curtain raiser to a Council meeting. Musicians also question whether playing new music to a few dozen people more worried about property taxes or urban sprawl is reaching the ideal market.

"Maybe the City should curate a Spotify playlist of all this good local music they want to promote," suggested singer-songwriter Garrett T. Capps. "That might get more exposure than playing it at a Council meeting."

Capps knows a little about exposure. After his Tex-Mex rocker "Born in San Antone" was featured as the season-opening song for Showtime drama series Billions this spring, Spotify plays of the tune hit 100,000 and mail orders for his merch jetted into high gear.

While Capps said he appreciates Nirenberg's sentiments, he'd love to see the City foster a program that helps local musicians afford health insurance. After all, despite his recent success, he's still schlepping at a day job.

For his part, Wayne Holtz, a queer-identifying indie-pop artist, said he's willing to take the promotion. Even if it may not be in the ideal form.

“It’ll be interesting for the people watching these meetings to experience part of the city — us artists that they might not know even existed," he said. "But are there better ways? Of course there are better ways."

Still, to Holtz's mind, Nirenberg is doing more for the music scene than any other recent politician: "He’s trying."

After the Internet blew up all the recording industry's old delivery models, the problem for most musicians isn't necessarily exposure but getting compensation for their endless hours of practicing, gigging and recording.

The average professional musician (not part-timers or weekend dabblers) makes between $20,000 and $25,000 annually, according to a recent Music Industry Research Association survey — and that amount has held flat for the past six years. What's more, 61 percent of those surveyed said music-related income "isn't sufficient to meet their living expenses."

But Jones said Local Music Spotlight is just an initial step of a larger effort to promote and sustain San Antonio's music scene.

The City's Music Commission hosted recent sessions with local musicians and venue operators to collect feedback on how it can help raise their profiles. And in coming weeks, it will launch a website that includes a toolbox for local artists plus a free directory of performers, promoters and venues.

And, as for Capps' suggestion for a Spotify playlist, that's in the works, Jones said. As is an iTunes playlist.

"This is just one piece of a larger plan," she said.

Especially when they're doled out in 30-second increments.