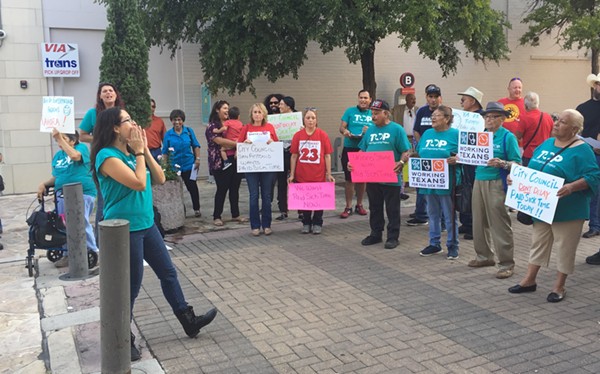 City officials have verified that labor and community groups collected enough signatures for voters to decide whether businesses should be required to provide paid sick time for workers.

The city now has the option of scheduling the proposal for a referendum or voting to adopt it as an ordinance. Council is scheduled to hold an Aug. 8 hearing on the issue and vote on it Aug. 16. It faces an Aug. 20 deadline to put items on the November ballot.

The Working Texans' proposed ordinance would require private businesses to offer employees one hour of sick leave for every 30 they work. Business groups oppose the requirement, saying it places too much of a burden on employers.

Before the meeting, several sick time advocates rallied outside the Municipal Plaza Building, urging council members to take action. More than 350,000 San Antonio workers do not have paid sick time.

"Either they do it by ballot or on the council dais," community organizer Joleen Garcia told the crowd outside of the building. "Either way, we want sick time for San Antonio."

Garcia warned that council could try to delay a vote until next year, which would allow the Republican-controlled Texas legislature to pass a law barring cities from mandating paid sick leave.

"We're willing to dole out consequences come election time if we don't get this now," she said. "We want city council to be accountable."

Outside chambers, Councilman Manny Pelaez agreed that delaying a vote is idea.

"If 144,000 people can hand in their signatures on time, then they expect this to happen sooner than later," he said.