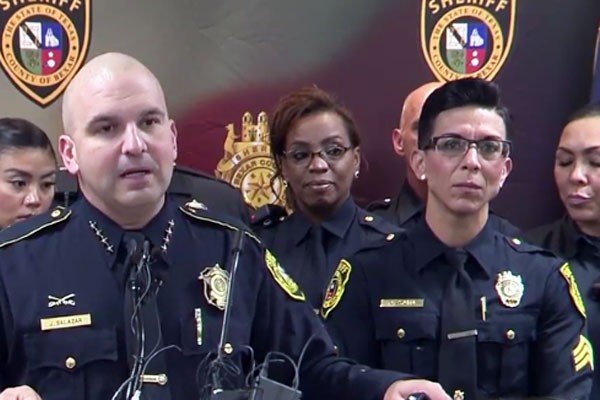 Bexar County Sheriff Javier Salazar has unveiled a new initiative, dubbed the “Community and Internal Liaison Program,” with the goal of creating relationships with culturally-specific communities in the county.

Among the 12 deputies who were appointed to the program is Sgt. Stephanie Flores who will serve as the sheriff’s liaison to the LGBTQ community.

“In law enforcement, it is always a good thing when the agency can say that they’re connected to the community they serve,” Salazar said at a press conference on August 13. “It’s a whole other thing to be able to say you’re intimately involved and you’ve got a working, two-way mutually-beneficial relationship with as many segments of the population as you can. We’re making strides in that respect.”

The liaisons will establish communication with the communities they serve, offering citizens help with interactions involving the Sheriff’s Department. In some cases, they will provide assistance with language translations and cultural protocols. Salazar said he foresees a time when the program is expanded to include more communities.

Standing alongside of the Sheriff at the press conference, Sgt. Flores said, “With that vision of the liaison program, what we want to do with the Bexar County Sheriff’s Office, we want it to reflect, be a direct reflection of the community.”

In an email to the magazine, Salazar said he recalls an interview with Out In SA that he gave in December 2015 when he was campaigning to be sheriff. During that interview he was asked if he would consider appointing an LGBTQ liaison.

His answer at the time was, “Absolutely. The SAPD has an LGBT liaison. I would like to create a team of officers that are liaisons to different segments of our population like the military, the African-American community, the Hispanic community and the LGBT community would definitely have a liaison.”

“You were the first reporter I ever talked to about the program,” Salazar said in the email. Less than three years later, Salazar’s initiative is now a reality.