Julián Castro On Where Hillary Went Wrong, the Fate of the Democratic Party and Latino Voters 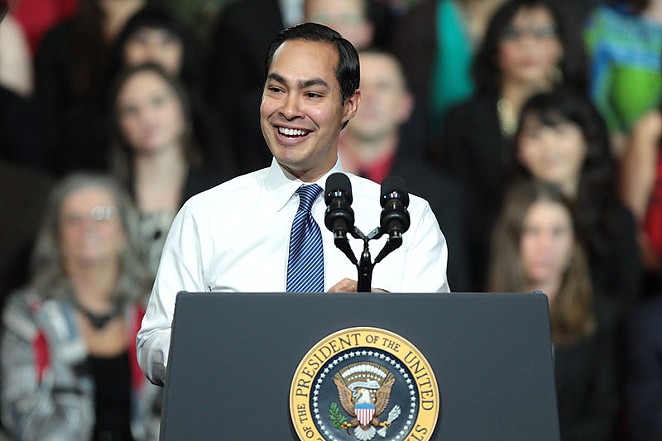 It's no secret that Castro has been eyeing the White House, especially during his visits to battleground states like Nevada, Florida, Arizona Iowa to campaign for Democrats as the midterm elections near. At the same time, he's been promoting his new memoir, which analysts see as a prerequisite for a presidential run.

"I'm likely to do it," Castro said about running for president. "I have a strong vision for the country. I believe that our country's going in the wrong direction and that it needs new leadership. I'll make a final decision after November, but I'm inclined to do it."

Castro's hesitation to make an announcement is in part due to his family as he has a nine-year-old daughter and three-year-old son. Though wife Erica has "been wonderful" throughout Castro's political career, he said they would look at the commitment of a presidential campaign.

"As I travel between now and Election Day, I'm getting a better and better sense of where the country is at," Castro said. "I don't feel compelled to make a rushed decision."

The conversation, of course, steered toward Castro being considered to be Hillary Clinton's running mate in the 2016 presidential campaign. He offered his input on where the Democratic campaign fell short.

"I think a number of people who were a part of the campaign are very proud that she won the popular vote by nearly three million votes," Castro said. "At the same time, if it could be done over, [they] would acknowledge more focus in certain states."

Despite America thinking there was no way Donald Trump could become president, Castro said the Democratic party learned the hard way about campaigning aggressively until the finish line.

"I'm confident that in the 2020 cycle, Democrats are going to robustly campaign in every single state and not take anything for granted."

But his potential run for president isn't the only thing Rolling Stone got out of Castro. He believes the Democratic Party has to change in order to survive.

"It's going to be cathartic for the party to go through a process where everybody gets to show what they've got," Castro said. "Where you have debates with over a dozen people and every wing of the party is represented. Most of the time a party wants to avoid that kind of process, but in this case, that's our salvation."

He believes the party should have a message of making things better for families. Castro says the party's 2020 nominee will have to articulate "a powerful vision of the future."

In some ways, Castro said U.S. Senate candidate Beto O'Rourke embodies that vision of the future.

"He’s a great, earnest, honest and energetic candidate. He’s done the hard work of getting out to every county in Texas, of sticking to what he believes in," he said. "He’s addressing the issues that people want to hear about, and he’s doing it in a genuine way. He’s taking the campaign to them."

The San Antonio native also discussed why Latino voters aren't showing up in big numbers to vote in the midterms.

"There needs to be a massive and sustained effort that’s well-funded and well-scaled to create a generation of Latino voters," Castro said. "And until that’s done, Latinos are not going to vote at the rate that they ought to vote at."