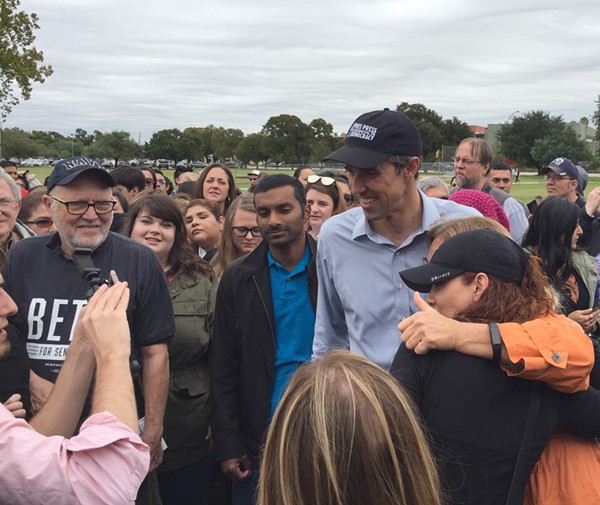 On the second day of early voting, both candidates vying to represent Texas in as U.S. senators dropped by San Antonio to help close the deal.

Incumbent Republican Ted Cruz and John Cornyn, the state's other Republican senator, made a 10 a.m. appearance at the Buckhorn Saloon and Museum downtown, a day after Cruz's Houston rally with frenemy Donald Trump.

Meanwhile, U.S. Rep. Beto O'Rourke — Cruz's opponent — raced between eight Alamo City polling places, starting at 7:30 a.m. on the East Side. He plans to end the sweep with a 7 p.m. concert and rally at Cowboys Dancehall.

"You guys are bringing it home," O'Rourke shouted through a megaphone to a couple hundred faithful standing on a muddy incline at Lion's Field . "You're turning it into action, into votes."

During the speech, O'Rourke hit on familiar themes — universal healthcare, taking care of teachers, protecting Dreamers — but the appearance was clearly more of a pep talk than a position speech.

"This campaign has defied all expectation, including the expectation that there was a lot of energy, a lot of excitement, but would it materialize into votes, into action?" he said, voice growing more hoarse during the ten-minute speech. "You've proven the naysayers and the cynics wrong, and you've proven that this country, through the people of Texas, can live up to its promise and its potential."