Higher Education Remains Committed to the SAT, But Scores of San Antonio Students Tell Us More About Income Than Aptitude

Well, my cousins were right: after your freshman year of college, nobody ever asks you your SAT score. And yet, in San Antonio, families can spend about $75 per hour, or between $1,000 and $2,000, on private tutoring and test prep courses for the four-hour test, said Lara Kilgore, CEO of Beyond Education, a tutoring and mentoring company.

“The SAT and ACT are the biggest obstacles standing between a student and college admission,” Kilgore said. “So parents are willing to do whatever it takes and pay whatever fee they can in order to guarantee their child a more competitive advantage.”

High SAT scores lead to college options, and a degree from a competitive college leads to more options for work. A good job leads to more in general.

The links between income and SAT scores tell us something about achievement in America. In this system, students’ efforts are magnified by parents’ income, making the highest scores into pricey tickets for admission to exclusive universities. The tests themselves have been shown to favor upper-middle class families with college-educated parents – an overwhelmingly white demographic – and the ferocious competition to get into top colleges is likely to maul any efforts to level the playing field.

Alamo Heights ISD is a cousin of Dallas’s Highland Park ISD or Austin’s Eanes ISD – a little quainter, but still bears the wealthy family resemblance. The Houston version of Alamo Heights, River Oaks, somehow resisted the urge to form its own school district – they may just send their kids to private school.

Those school districts help illustrate just how closely SAT scores are tied to income. And it matters, because many of these kids are competing to get into the University of Texas-Austin, Texas A&M, and Baylor.

Because the SATs offer a broader range of scores than just one through 100, the correlation between income and score can play out more dramatically. Have a look at the data.

If you control for the percentage of students who take the test (lower percentages of test takers raise the average score), most of the scatter plot points hug even closer to the line.

The College Board, the company that produces the SAT, self-reports the income/score correlation as well. Statewide, students with a family income between $20,000 and $40,000 – like most students in San Antonio ISD – had mean test scores around 300 points lower than their peers in the highest income bracket.

Wealthy families typically spend more on test prep, which is another statement that might go without saying, except that they get what they pay for. But before you panic and remortgage your house, just be glad you don’t live in New York City, where at least one notorious tutor charged $1,000 per hour for private SAT test prep. So, congratulate yourself for living in San Antonio – a solid fiscal life choice.

We already knew that standardized test scores are closely tied to family income…right? Teachers certainly know. Superintendents know. If that’s news to you, I’d like to offer you a few moments to go through the stages of grief, as you realize that dreams of a meritocracy are basically dead.

Denial: “No! This is a meritocracy! Anyone can succeed, and we all get by on our wits.”

Anger: “Quit making everything about income inequality, you Bolshevik!”

Bargaining: “But, really, maybe it’s just a correlation, not a cause. People with higher income value education more, and they make good life choices, so, of course, their scores are higher!”

Depression: “So what you’re telling me is that I have no free will and that my life outcomes are just determined by my parents’ income.”

The SAT may get us to the last stage – acceptance. The SAT is possibly the most consistent, universal and consequential standardized test most people will take in their educational career, maybe even in their lifetimes. It was first used in 1926, and in 1942 became the universal reference test for college applications. As colleges grew more competitive, so did SAT scores.

“Nearly every parent will tell you that back when they applied to college, taking the SAT was just a checkbox. It didn’t necessarily matter what score you got, you just had to take it,” Kilgore said, “Today, the SAT and ACT can send a 16 year old into an anxiety-filled tailspin, and parents feel ill-equipped to manage the stress because they didn’t live through it.”

So home becomes test-prep central, and everyone is hyperventilating for about two years. But the individual student isn’t the only one being judged on their test score.

SAT scores are also one of the “college readiness” measures by which school districts in Texas are measured. The state tracks the percentage of students who take the SAT and ACT, and how many of those students score “at criterion,” or college-ready, levels. For the SAT, that is usually considered to be a least 1,100 and, for the ACT it’s a minimum of 24.

You can guess how that stacks up.

Most educators will tell you that it’s entirely normal to see a connection between income and test scores. They go up together. They go down together. But on tests where private tutors and expensive prep courses are not in play, schools have proven that they can make up the difference. It’s difficult and expensive, but on tests where the impacts of having upper-middle class parents is relatively squishy (such as STAAR or PSAT), it can be done.

What makes the SAT’s difference so stark, and the gaps so pernicious, is the direct activity of parents pouring funds in to test prep. Once that happens, the influence of wealth on test performance skyrockets.

Getting test prep into the hands of all students has become a bit of a cause. The Chan-Zuckerberg Foundation has partnered with the College Board to distribute free test prep material to students and high schools. According to the College Board’s internal research, the SAT practice program offered by Kahn Academy, a free online instructional service, has been shown to boost scores an average of 115 points if students dedicate at least 20 hours to studying.

San Antonio ISD and other low-income districts offers some free SAT prep courses, and so does the city’s Café College downtown.

Alamo Heights ISD offers an SAT test prep course through an outside vendor. Parents pay for it, but it’s less expensive than a private tutor.

College-prep charter networks like IDEA Public Schools double down on test prep, trying to show that rigor and high expectations can close almost any gap. IDEA outscored their economic peers by about 100 points, but IDEA was still well behind the wealthiest districts.

Another college-focused charter, KIPP Texas, uses the free Kahn Academy and Kaplan test prep, but it also focuses more on the ACT than the SAT, said Ruben Rodriguez, director of KIPP Through College for KIPP Texas. He cited studies that show the SAT uses words – in the vocabulary section, reading comprehension passages and word problems in the math section – that are inherently more familiar to middle- and upper-income students.

The College Board has responded to some of these concerns. The SAT’s 2017 redesign did away with some of the WTF vocabulary words and reading comprehension passages, and adjusted the scoring to make the test questions more relevant and aligned with what students are taught in high school. In theory, this should also make the test more class-neutral. 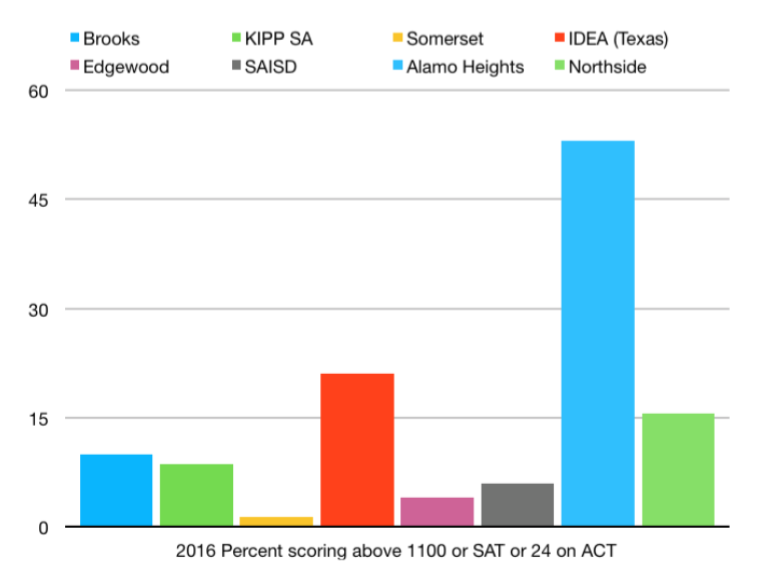 Still, the stunning gaps can’t all be attributed to problems with the test itself. The gaps on the College Board’s own PSAT (the SAT practice test) are not as drastic as those on the SAT.

There’s still just no substitute for good old-fashioned money and all that it can buy.

“Although most private tutors don’t have a guarantee program like the larger test prep companies such as Kaplan or Princeton Review, they do make near-promises to parents that student’s test score will improve by 200-plus points,” Kilgore said. “And if the student does the work assigned and is diligent, a 200-point improvement for someone who scored in 50-60th percentile is definitely doable.”

So as long as SAT scores remain vital to college admissions, and private tutors keep upping student scores, the competition will only intensify. At this point, Kilgore estimates, around 70 percent of families in affluent schools pay for some sort of private or extracurricular test prep.

She has a solution for lower-income families, though.

Kilgore is reaching out to companies like Whataburger, Bill Miller and H-E-B to see if they would consider offering tutoring and SAT prep courses as a benefit to the children of employees – all employees, not just the c-suites who can already afford it.

It’s not an entirely novel idea. Companies such as Intel Corp. in California have begun to offer private tutoring benefits to employees so that their kids can get homework help while the parents are still at work.

Of course, if competition intensifies – if Kilgore’s plan works and college prep charters like IDEA and KIPP keep raising scores – then what?

We know what. We have not yet found the limit on the price professional parents are willing to pay to help their kids gain an edge. That fact makes me uncomfortable, because I’m one of them, and the pressure is overwhelming.

As the glut of bought-and-paid-for test scores clogs college admissions pipelines, some universities are broadening their admissions criteria, but we are a long way from total abandonment of the standardized test, and the economic advantages that go with them.

And that’s what we have to accept. We have to grieve the death of our meritocratic dreams. But, of course, acceptance isn’t the ultimate goal. The ultimate goal is change. We can come up with a more fair system, but first we have to want to.