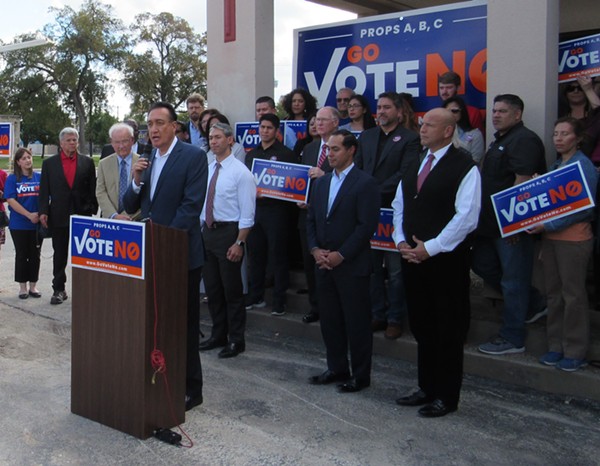 At an afternoon press conference, five San Antonio mayors lobbed salvos at a trio of charter amendments the city's fire union placed on the November ballot.

"We don't want to get off of this track of expanded opportunity and economic growth," said Castro, backed by a group of political and business leaders. "These propositions threaten that economic growth and our future. I can understand sometimes why folks may have frustrations about certain things that happen at city hall, but these propositions are not the way to improve anything."

The fire union, contract negotiations with the city, has sold its amendments as a way to put democracy back in citizens' hands. But groups as disparate as the city's chambers of commerce and the Texas Organizing Project warn they could endanger the city's ability to govern.


One amendment would lower the bar for putting proposed ordinances – such as utility rate increases or the city's non-discrimination ordinance – to a public referendum. Another would cap future city managers’ compensation and force them into term limits. The final would require the city to take union contract disputes to binding arbitration.

Fire union chief Chris Steele was unavailable for comment at press time. The union official went into radio silence during a combative early October news conference, saying he would no longer address questions about the public campaign.