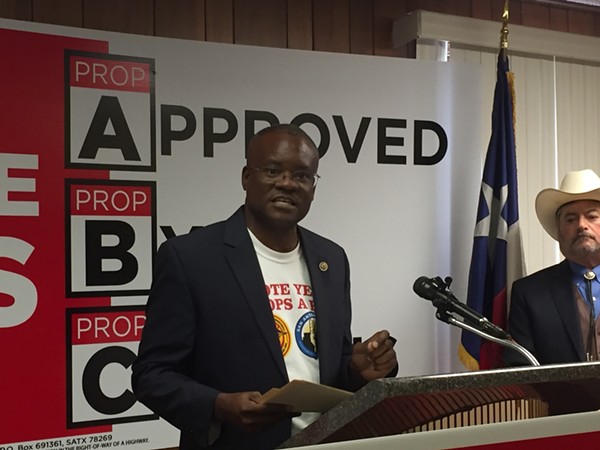 The Go Vote No campaign on Tuesday continued trickling out secret recordings of fire union president Chris Steele bragging about his political clout.

In six sound files emailed to the media, Steele appears to tells a group of firefighters he's able to control the state legislature and that he'll make Mayor Ron Nirenberg "cry uncle" over the union's stymied contract talks with the city. The secret recordings come to light as voters consider a trio of city charter amendments the union placed on the November ballot — ostensibly to give ordinary citizens more power over city hall.

In the audio files, Steele said the union could draw attention to San Antonio's crime rate to keep people away from Tricentennial celebrations, thereby forcing Nirenberg to cave on contract talks. "Don’t come to San Antonio for the 300-year, because you’re not going to be safe," said Steele, who incorrectly states the city has the nation's highest crime rate, "over Memphis, New Orleans, Detroit."

In recent weeks, the amendment-opposing Go Vote No camp released similar audio of Steele in which he said the ballot propositions are designed to win the union a new contract and help Councilman Greg Brockhouse unseat Nirenberg as mayor.

"Taxpayers, including firefighters and their families, have yet more evidence that Chris Steele is their real enemy," Nirenberg said in an emailed statement. "As mayor, I am committed to getting firefighters the fair contract they deserve that is responsible to the needs of our residents — not to the reckless political manifestos of Chris Steele."

Critics argue the union's proposed amendments are designed to hurt the city in retaliation for its court battle over the union contract.

One of the amendments would lower the bar for putting proposed ordinances to a public referendum. Another would cap future city managers’ pay and tenure. A third would require the city to take contract disputes with the union to binding arbitration.