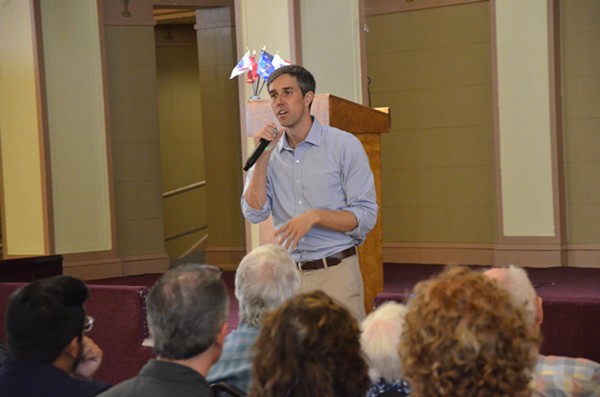 “I think it’s something positive for the United States that he can offer and share ideas,” O’Rourke said of Castro, the former San Antonio mayor who also served as the secretary of Housing and Urban Development under President Barack Obama.

Castro has said he is likely to run for president, and announced Wednesday that he has formed an exploratory committee to consider a bid. He will make an announcement about his decision Jan. 12.

O’Rourke lauded Castro’s service to Texas and the country and said he was proud of the former mayor.

Discussing his own plans with reporters on Friday between two different town hall meetings, O’Rourke said he hasn’t ruled anything out, including a possible challenge to U.S. Sen. John Cornyn, R-Texas, who is up for re-election in 2020.

“Though it’s now five plus weeks since the [2018] election ... I am no closer to deciding," he said. "I thought I’d have a level of clarity or an epiphany at this point."

In November, O’Rourke lost in his race to unseat U.S. Sen. Ted Cruz, R-Texas, though the closer-than-expected margin inspired many of his supporters to urge O'Rourke to run for president. He said Friday that he’s focused on using his remaining days as a congressman to represent his district. He said he’ll likely have a better idea of what he plans to do afterward.

“Part of it is that we are trying to finish the job and make sure that we honor our responsibilities to the people of El Paso,” he said. “We’ve got a lot of work to finish out and I am hopeful that, after that, spending some time with family, I’ll know what I can best do for — first and foremost my family — and then the country.”

After speaking with reporters, O’Rourke held his 104th and final town hall in El Paso. He also planned to travel to Ciudad Juárez on Friday to visit with asylum-seekers at a migrant shelter — and to hold another roundtable with reporters after that.

O'Rourke is scheduled to attend a rally outside the detention center for migrant youth in Tornillo on Saturday and said he plans to return to Washington next week as Congress tries to avert a partial government shutdown. The main reason for the stalemate is funding over President Donald Trump’s promised border wall, which O’Rourke said he will not support.