This spring, after former U.S. Attorney General Jeff Sessions announced the Trump administration’s “zero tolerance” immigration policy, people watched in horror as children were ripped from the arms of their parents.

As public furor grew, the policy’s defenders threw around three words that muddied the reality of the situation: “Just come legally.” To avoid separation, they said, all families seeking entry simply need to report to a border crossing and declare they’re seeking asylum.

Under international law, it’s legal for immigrants to seek asylum in the United States, but starting that process at ports of entry isn’t as simple as the Trump administration makes it sound. The administration’s tactics have made it extremely difficult for asylum seekers to cross over legally.


Brownsville Crossing
I traveled to Brownsville on a cold, rainy morning to witness what’s happening as asylum seekers approach the bridges to South Texas from Matamoros, Mexico.

Elisa Filippone, a member of the refugee-aid group Angry Tias and Abuelas of the RGV (Rio Grande Valley), met me in front of the Gateway Bridge. Filippone, one of 11 core members of the Angry Tias, provides food, clothing and even temporary shelter to asylum seekers arriving at bus stations and bridges in Brownsville-Matamoros.

“When we learned of the separation of families, we felt that doing nothing was being complicit,” Filippone said.

There’s a border wall on the U.S. side, across the Rio Grande, that’s about 20 feet tall with vertical pillars. It was built during the George W. Bush administration as a “wildlife-friendly” wall, which would allow the passage of some animals but not people. More recently, concertina wire was added by the Trump administration — a waste of money, in Filippone’s eyes.

“I don’t need the protection of our soldiers against people who are not armed and in shock from the violence they have suffered,” she said.

Together, we traveled across the Gateway and Brownsville & Matamoros international bridges — the latter commonly called the B&M or the “old bridge” — to bring warm tortillas, clothing and emotional support to asylum-seekers.

A group of asylum seekers camped out on the Mexican side of the B&M. There was a 20-year-old pregnant woman from Honduras, a mother with a child who looked about six years old and a few other people under tarps, makeshift tents and umbrellas trying to stave off the drizzle.

Filippone asked if they had eaten breakfast that morning. Groups from the U.S. bring dinner every night, but breakfast has been lacking for the past week or so. They said no but added that they didn’t need anything. Even so, we went to get them warm corn tortillas and cajeta.

“The task at the bridges is to sustain [the asylum seekers],” Filippone said. “The task at the Brownsville bus station was to keep them safe for the night. … With the winter change, immigrants need a winter coat to arrive up north where most of them are going.”


Waiting Game
According to U.S. Citizenship and Immigration Services, the first step to seeking asylum here is to arrive on U.S. soil. “To apply for asylum in the U.S., you must be physically present in the U.S. or seeking entry into the U.S. at a port of entry,” the Affirmative Asylum Process states.

I witnessed Border Patrol actively turning people away at ports of entry, however, creating a waiting game or a stall-tactic hell.

And recent data show that U.S. Customs and Border Patrol agents are simply not allowing people to seek asylum at ports of entry in significant numbers. So, coming here “legally” is impossible at times and arduous at best.

According to a report released this month by the Robert Strauss Center for International Security and Law, only zero to six people are processed daily in Brownsville-Matamoros. Filippone’s conversations with asylum seekers seem to back up those numbers.

“We learned that only one person has come across to be processed for asylum, a woman from Ethiopia who has been there waiting close to 80 days,” Filippone said. “At the B&M bridge, the old bridge, we found 10 people allowed [onto] the bridge. … Somebody crossed two days ago also, and that’s it.” 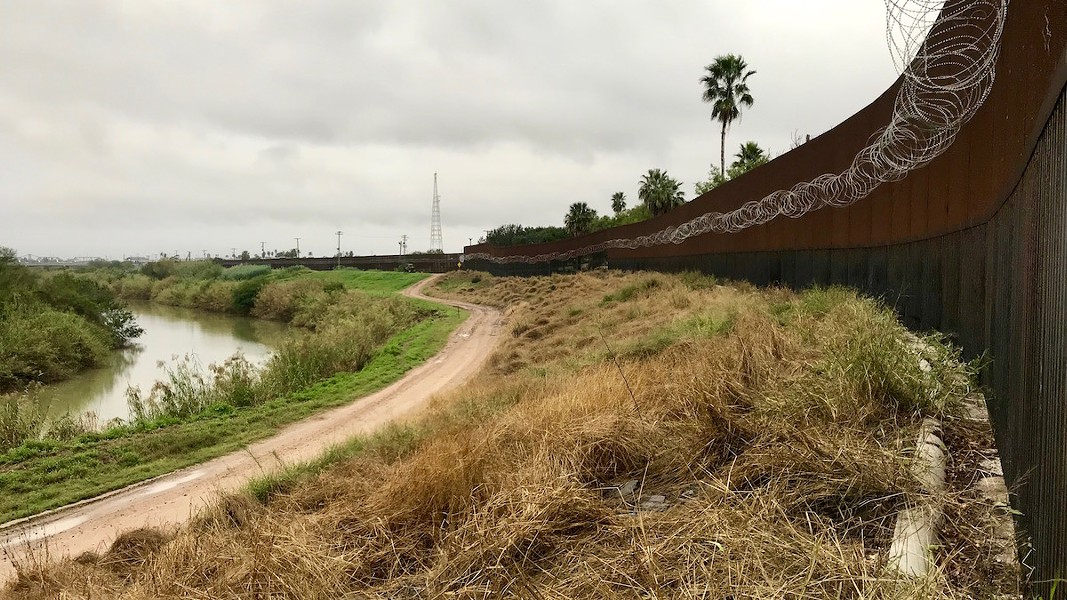 Turned Away
As recently as June, asylum seekers were allowed to wait on the Gateway Bridge in Brownsville. But that clearly wasn’t the case on my visit. When a couple of women with young children stood too close to the U.S. boundary, they received a stern warning from Border Patrol agents.

“Don’t step over the line, because that would be illegal entry,” an agent told the women. “Step back.”

It shouldn’t have been illegal entry at that point, since the boundary line is before the U.S. Customs building, where people are supposed to request asylum.

“It used to be that you would just walk the whole bridge, cross the physical border line into the American Customs building, and in there, being on American soil, ask for asylum,” Filippone said. “This administration is making them go to the bridges and turns them away there.”

Under the new process, asylum seekers are told to wait “in line” at their camp outside the bridge. It’s a confusing situation that led one family to wait outside the line because they were unclear with the instructions and didn’t feel welcome in nearby camps. As the lines build, the asylum seekers aren’t only clustered near the bridges but also in nearby shelters like Casa Bugambilia in Matamoros.

In contrast to the Gateway Bridge, the first few people lined up at the B&M are allowed onto the bridge. Those further down, however, must remain in their camps.

At camp sites by both bridges, the asylum seekers are exposed to the elements. At the B&M, there’s no shelter since the people aren’t allowed onto the covered bridge. They asked Filippone for ponchos and umbrellas, so they can stay dry. There are people in flip flops and wet socks.

“Once you have your spot up on the bridge, you just don’t move from there,” Filippone said. “People don’t go shower. They wait for food there. It’s hard for them to make it down to the bathroom quickly. It doesn’t matter if you’re the third or fourth in line. [Border Patrol] might call somebody from down the line and skip people in front. There’s no method. That’s why they don’t want to leave their posts once they make it up here.”

During my visit, there were about 10 people camped out on the B&M bridge, including one pregnant woman and a child.

“She’s 20 years old, six months pregnant,” Filippone translated. “The other women, the other people in camp allowed her to take that place in line, because she’s pregnant. ... The husband is staying behind [in the camp].”


Stripped of Dignity
It’s difficult to count for how many people are waiting in Matamoros to seek asylum, because some camps are in off-site shelters.

One of those shelters housed 283 people at last count, according to Filippone. There also were 27 people at the base camp near Gateway Bridge and another 10 located on the B&M bridge. At the base camp near B&M, numbers fluctuate. By my estimate, a total of a few hundred people wait in limbo around the two bridges.

One of the off-site camps we visited is located in a Mexican office building near the B&M. Two Mexican guards stood outside the entrance, which is lined with a fence. We approached and said we were bringing food. They allowed us in but told me I couldn’t film.

Despite the warning, I snuck my camera into one area of the building, where a half-dozen people were crammed into a 5-by-12-foot space. Blankets, pillows, shoes, plastic bags and other belongings cluttered the floor. One woman was lying in the corner and others sat against the wall. A few people overflowed outside, where thin mats lined the curb outside the glass doors. More huddled under blankets.

“You see this?” Filippone asked. “Stripping people of their dignity is just — this is not something that America should be doing.”

While there, we spoke to one asylum seeker from Cuba, who was determined to wait out the hardship.

“Even if it’s hard, we have to do the fight and pursue our dream,” she told us. 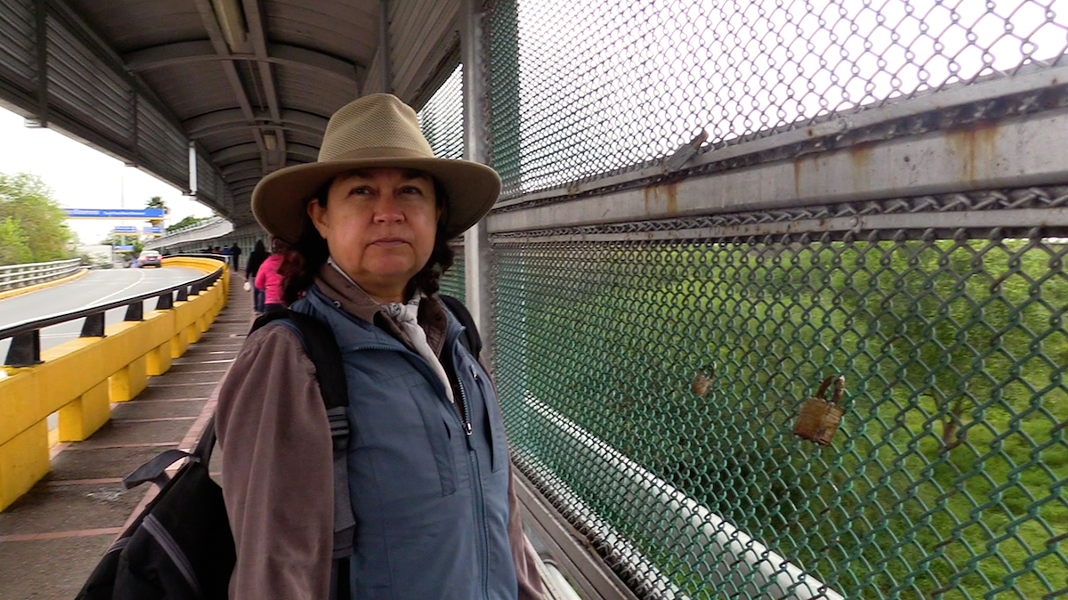 We walked to another camp closer to the Gateway Bridge on the grounds of another office building. To get inside, we had to enter through a small gated area where a Mexican security guard sits. Again, I was told not to film inside.

We were told that 27 people camped in the area. Two rows of cots lined the outside space, about seven on either side. The rest of the people, likely women and children, must have been upstairs in the building.

Tarps kept the rain off the camp but only covered the cot area, and it was cold. Step a few feet away, and you’d get wet. A woman sat on a cot underneath blankets, a couple of men stood near the entrance and a child wandered around. At the far end of the camp sat a shelf stocked with extremely limited kitchen items — a jug of water and a few supplies. We asked if anyone had eaten breakfast, and no one had.

Filippone and I went to the store and brought back warm food. A child asked her for gloves because his hands were cold. She reached into her backpack and offered him a variety of colors to choose from.

It was in the mid-50s that day, drizzly and wet, and the temperature dropped to the mid-40s that night.


Psychological Warfare
Some may be tempted to write off what we saw as an anomaly at one border crossing, but there’s evidence it’s being repeated elsewhere.

A June Texas Monthly report found similar conditions in McAllen, for example. And, in El Paso, Border Patrol agents are writing numbers on asylum seekers’ arms to signify where they are in line.

To call this treatment of asylum seekers cruel is an understatement. The administration continues to tell people to come, arrive legally and they’ll be processed. But, when they follow these directions, they’re met with agents who turn them away as part of a stalling game.

The Trump administration is creating the crisis — and it’s completely unnecessary. The number of unauthorized immigrants is at its lowest point since 2004, according to a Pew Research Center report published in November. By Homeland Security’s own count, in December of 2017 arrests for people trying to enter without permission reached its lowest level since 1971.

Even though days have passed since my visit to the border, one story still haunts me. A pair of mothers stranded in line recently stopped lactating due to the stress of the situation, Filippone told me. Angry Tias and Abuelas of RGV helped the mothers get formula because they could no longer feed their children.

Make no mistake, this is psychological warfare. Ripping children from their families, telling people to wait outside in the cold and rain indefinitely for inexplicable reasons is meant to traumatize people and deter them from coming here. Data has repeatedly shown this strategy of intimidation doesn’t work. All it does is hurt an already vulnerable population and put them further in danger.

Rebecca Centeno is a Mexican-American activist media maker and video journalist. Her work has been featured on Democracy Now!, Free Speech TV, the Washington Post, act.tv, NowThis Politics and Deep Dish TV. In 2015, she co-founded Reels for Radicals, a screening series by Paper Tiger TV and Deep Dish TV, highlighting the work of political filmmakers and creating space for critical dialogue.

For more information on Angry Tias and Abuelas of the RGV, visit facebook.com/angrytiasandabuelas.