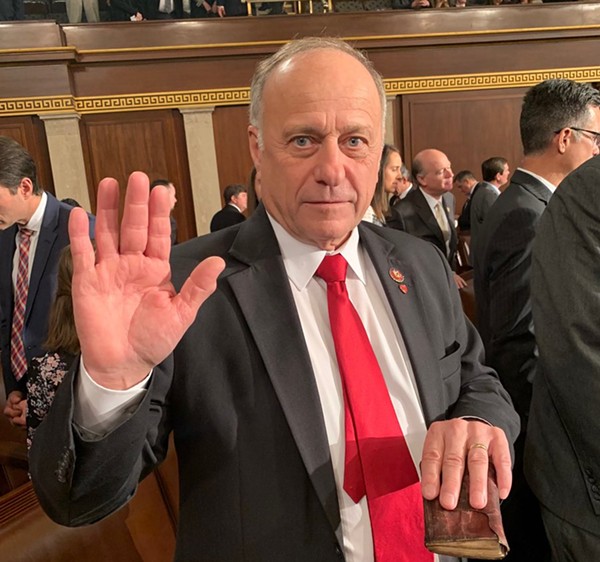 Despite condemnation by fellow Republicans for a recent racially charged remark, Rep. Steve King has raked in hefty campaign contributions from three of Texas' most prominent GOP figures.

Sen. Ted Cruz, former Rep. Lamar Smith of San Antonio and Rep. Kevin Brady of Houston each provided thousands of dollars to the nine-term Iowa congressman, according to research by the nonpartisan Center for Responsive Politics.

Cruz was a contender to be the Republicans' 2016 presidential nominee, while Smith chaired the House Science, Space and Technology Committee and Brady is a ranking member of the House Ways and Means Committee.

Lawmakers from both sides of the aisle have dog-piled King following an interview last week in the New York Times, in which he appeared to defend white supremacy.

“White nationalist, white supremacist, Western civilization — how did that language become offensive?” asked King, known for his history of anti-immigrant rhetoric and inflammatory comments on race.

But, until now, that history didn't appear to bother numerous mainstream Republicans who funneled money into King's election campaigns. He raised nearly $873,000 in the 2018 cycle, about half from large individual contributions, according to Center for Responsive Politics.

Cruz decried King's recent comment on white supremacy as "stupid." Even so, the senator still flowed King $4,868 from his leadership PAC and even permitted him to co-chair his 2016 presidential bid after King refused to apologize for promoting a neo-Nazi on Twitter.

San Antonio's Smith, who retired late last year, was King's fourth-biggest financial backer among elected officials, paying out $13,179 during the Iowan's House career. Smith used his chairmanship to harass climate scientists, while King, a fellow climate change skeptic, once said such research was "more of a religion than a science."

Meanwhile, Brady ranks third in politician donations to King, according to the Center for Responsive Politics. The Houstonian's campaign committee and leadership PAC have donated a combined $14,000 over King's House tenure.

Since the Times interview, King has issued a statement claiming his comment was "completely mischaracterized." Even so, he's since been dropped from his assignments on the House's Agricultural Committee and Judiciary Committee by Republican leaders.

That's unlikely to satisfy Democrats, though, some of whom are now calling for his censure or resignation.

“I don’t think there is any place for him or those comments in the United States Congress," Gregory Meeks, D-New York, told Roll Call. "We’ve got to get rid of the climate and to show all the citizens of the United States that that’s not who we are as a country.”