Texas Lt. Gov. Dan Patrick Claims Drug Lords Would Be Decapitating People in El Paso If Not for the Border Wall 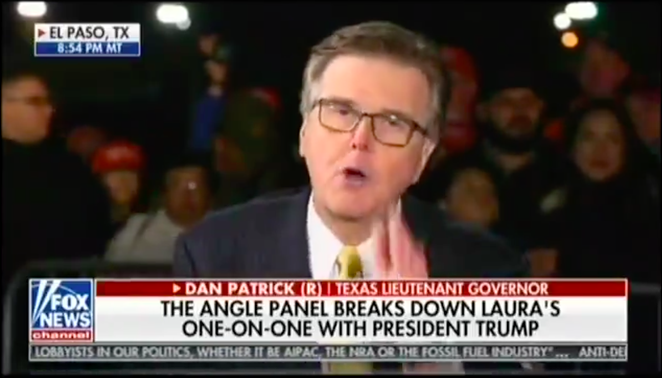 Anyone who thought Lt. Gov. Dan Patrick might throttle back his rhetoric after eking out a single-digit November victory against a underfunded underdog candidate might want to think again.

On Fox News last night, the Republican not only defended President Trump's erroneous claim that El Paso's border wall was responsible for cutting the city's violent crime rate, he did so while ratcheting up the blood, guts and hysteria.

Speaking to Fox’s Laura Ingraham after Trump’s El Paso rally, Patrick declared that if it weren't for the border fence, drug lords would be spreading their reign of terror into the city, decapitating victims and stringing up dead bodies.

“If that fence were not here, that violence, of decapitating people, of hanging people from bridges, of cutting off their heads in pool halls and down the street, that violence would be here in El Paso,” Patrick said.

Texas Lt. Gov. Dan Patrick says that without a border fence, corpses would be hanging from bridges and decapitated heads would roll in pool halls pic.twitter.com/lw6ShnyfLz

Of course, Patrick offered nothing to back up the claim, even as another guest again pointed out that statistics show violent crime was on the decline in El Paso well before the border fence went up.

But, then, Patrick has always been prone to fan the flames of hysteria. Anybody remember the unnecessary and unpopular bathroom bill he championed last legislative session to the tune of a million dollars of wasted money and a month-long special session?