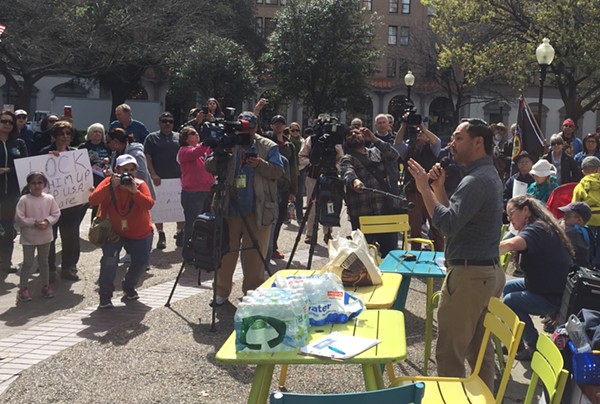 "I ask every Democrat and every Republican again — this should be above party politics — to come together ... to protect separation of powers, to protect the rule of law," said Castro, a San Antonio Democrat. "This president does not have the right to singlehandedly build a wall across the U.S.-Mexico border."

The Travis Park rally was one of many held across the nation today in response to the declaration Trump signed Friday to make an end-run around Congress and fund construction of 230 miles of border barrier.

Castro last week announced he would file a joint resolution to terminate Trump's emergency declaration. That measure now has 78 cosponsors, he told the crowd.

At least three lawsuits by groups including Public Citizen and the Center for Biological Diversity have challenged the legality of the president's order. The state of California and the American Civil Liberties Union have also announced plans to sue.

"What are we living through is an abuse of power," Gina Ortiz Jones, who ran an unsuccessful bid to unseat Republican U.S. Rep. Will Hurd, told the San Antonio protesters. "It's an abuse of trust. It's a callous disregard for the people's trust placed in the office of the presidency."