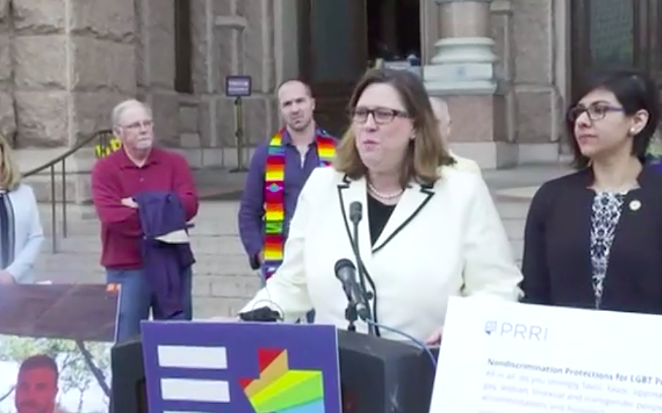 One of Texas' largest LGBTQ advocacy groups today unveiled a report detailing barriers to equality in the state and demanded that the legislature pass a comprehensive nondiscrimination law this session.

Speakers including activists, parents and legislators joined Equality Texas at the steps of the state capitol to ask that lawmakers adopt a measure protecting the 930,000 Texans who identify as LGBTQ.

"Discrimination still shapes the daily lives of many LGBTQ Texans," said Samantha Smoot, Equality Texas' interim director. "And it’s no wonder, because in Texas you can still be fired, denied an apartment or refused service, just because of who you are, or who you love."

LGBTQ adults in Texas are more likely than others to face poverty, unemployment, hunger and homelessness, according to the group's new report. Around 30 percent live in poverty, and that number is even higher for LGBTQ people of color.

Meanwhile, 64 percent of Texans support laws to protect gay, lesbian and transgender people from discrimination, according to the report, which cites polling data from the Public Religion Research Institute.

At the same time, bills that would create special rights to discriminate for people who hold anti-LGBTQ religious beliefs are active in both the House and Senate.