Joaquin Castro Likely to Run for Cornyn's Senate Seat in 2020 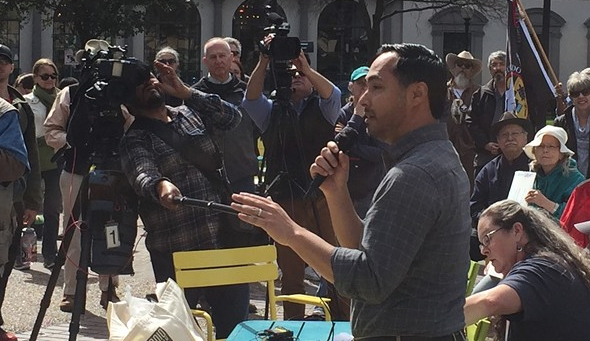 Looks like Democrat Joaquin Castro is hoping to build on the Beto effect.

Looks like I might have some company on the campaign trail soon. I know this: @JoaquinCastrotx would work hard for Texans, not for cozy Washington insiders. https://t.co/nkgtDKxj0k

Castro would be a high-profile contender for the longtime Republican senator. And observers suggest Cornyn may be more vulnerable than in years past, thanks to the state's changing demographics and his apparent unwillingness to distance himself from President Donald Trump.

Castro, head of the House Hispanic Caucus, has aggressively gone after Trump's immigration polities, penning the measure that rebuked the president for his emergency declaration over the border wall. Meanwhile, Cornyn last week voted against Castro's proposal, chastising Democrats for leaving Trump with "few options to fund what he believed was so important for the nation's security."

What's more, Julián Castro's presidential bid could help draw more national attention — and fundraising dollars — to his brother's challenge to Cornyn, should it come to pass.

On the flipside, though, Cornyn seems to be well-prepared for a challenge. The senator has scraped together an impressive $5.8 million war chest and started gathering staff and endorsements, Politico points out. He recently warned that Texas is "no longer a reliably red state."

Indeed, how a Castro-Cornyn contest plays out could be the best barometer yet for how purple the state has become.