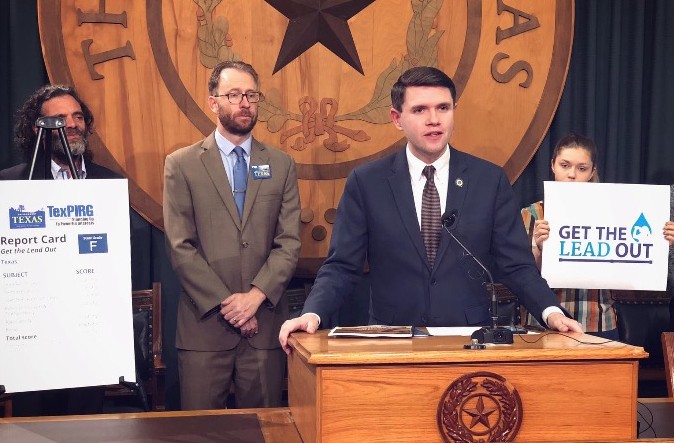 A pair of environmental groups released a report Thursday giving Texas a failing grade for its efforts to deal with lead in schools' drinking water.

Since 2017, testing has uncovered lead in the drinking water of at least 784 Texas schools, or 71 percent of those tested, according to the report by Environment Texas and TexPIRG.

Many schools have drinking fountains or faucets that contain lead, posing a contamination threat, the groups said. Even so, Texas has no specific law aimed at preventing lead contamination in school drinking water.

“Schools should be safe places for our kids to learn and play, but Texas is still failing to protect our kids from lead in drinking water,” Environment Texas Executive Director Luke Metzger said in a press statement. “We need policies that actually get the lead out of faucets and fountains in our schools and pre-schools.”

The two organizations threw their support behind HB 2998, a bill filed in the Texas House of Representatives by Round Rock Democrat James Talarico. That measure would require that drinking water to contain no more than one part lead per billion, the level recommended by the American Academy of Pediatrics. It would also require water utilities to pay for lead remediation.

Children are particularly vulnerable to lead poisoning, which can affect development of the brain and nervous system. Lead is also stored up in human bodies through repeat exposure and result in long-term health effects in adults.

“No parent should have to worry about their child drinking from a school water fountain,” Talarico said in a statement. “It is our job to ensure that every aspect of Texas schools are safe. I’m proud of the work our office is doing to guarantee our students are healthy, safe, and ready.”