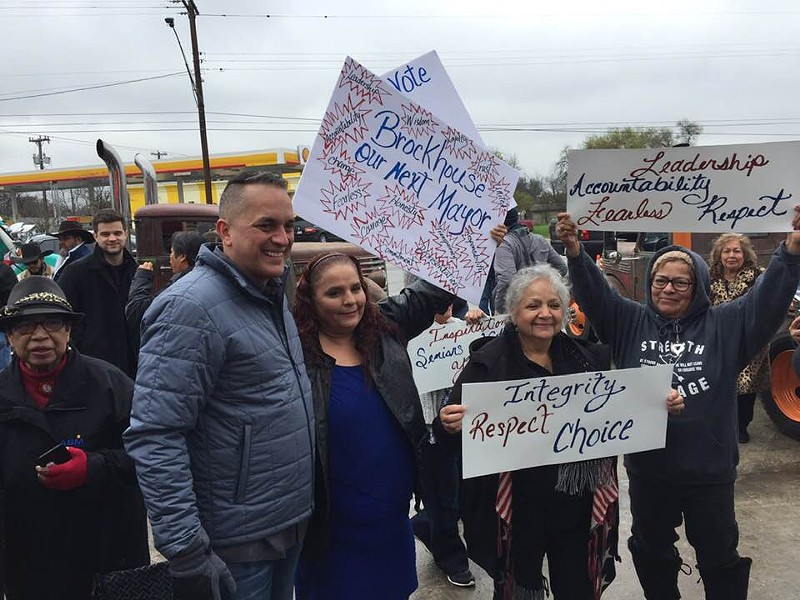 May’s election may not hinge on whether voters get behind Mayor Ron Nirenberg’s ambitious transportation plan or accept chief opponent Greg Brockhouse’s explanation for why he was reportedly at the center of a pair of domestic disturbance calls.

It may not even come down to the candidates’ diametrically opposed views on the city’s climate action plan or whether San Antonio should have chased the 2020 Republican convention.

Like most mayoral elections of San Antonio’s modern era, race and ethnicity are likely to play a central role, said Heywood Sanders, a professor of public administration at the University of Texas at San Antonio.

“Clearly, there are voters in San Antonio who parse candidates’ records and positions and that participate in town halls, but they’re relatively few,” he said. “Overall, the data show that factors of race and identity have a lot to do with the outcomes.”

Sanders would know. He’s parsed the numbers for mayoral elections dating back to the 1970s.

And the overwhelming trend is that largely Anglo North Side districts — especially the high-turnout districts 8, 9 and 10 — tend to skew toward business-friendly Anglo candidates, while Latino-dominated districts, say the West Side’s districts 5 and 6, tend to go to Latino and progressive candidates.
While the 2017 battle between mixed-race Nirenberg and African-American incumbent Ivy Taylor didn’t exactly fit the mold, ethnic bloc voting, as political scientists call it, still appeared to play a key role.

According to Sanders’ analysis, voters in predominantly Latino districts helped propel Nirenberg past the more-conservative Taylor, who won in the overwhelmingly African-American East Side while holding a narrower North Side advantage.

Such considerations are important in May citywide elections because the turnout is so low. In the 2017 runoff between Nirenberg and Taylor, for example, just 98,942 — or 11 percent of the county’s 1.1 million registered voters — cast ballots. Nirenberg clenched that victory with fewer than 9,100 ballots.

What’s intriguing this go-round is that, like 2017, the candidates don’t fit into the typical boxes.

Nirenberg — whose father was of Russian Jewish background and whose mother is of mixed Filipino, Malaysian, Indian and British ancestry — has positioned himself as a forward-looking candidate shepherding a largely like-minded council.

Meanwhile, Brockhouse, a right-wing populist who’s sparred with Nirenberg since being elected to council’s District 6 seat two years ago, has a Latina mother and an Anglo father.

Another wild card is the anti-status quo sentiment voters expressed last November with the passage of a charter amendment that pushed out longtime city manager Sheryl Sculley, a Nirenberg ally.

Are those same voters still angry, and do they view Nirenberg as an enabler for the powerful but unpopular Sculley?

“It might be a close race, but we’ve got to give the edge to the incumbent,” said Arturo Vega, a political science professor at St. Mary’s University. “I just don’t think there’s been any fatal issue where people will say ‘I’ve got to go and vote him out.’”

Vega cedes that ethnic bloc voting plays a role in San Antonio’s mayoral races, but he’s not convinced Brockhouse can win overwhelming support from pragmatic pro-business North Side voters, some of whom are likely to see him as a bomb-thrower.

Likewise, Vega added, the councilman will have a hard time currying favor with West Side voters without the endorsement of prominent Latino political figures. That hasn’t happened yet and is unlikely to with the election only five weeks out.

Even so, when Brockhouse declared his run in February, it was hard not to notice how prominently he put his Latino credentials on display.

The party took place in front of the West Side’s historic Del Bravo Record Shop, the sidewalk stacked up with classic cars and taco vendors. During his speech, Brockhouse ticked off details about his lineage, his conversion to Catholicism and being raised on the South Side. His wife Annalisa, a Latina, introduced him to the crowd.

In a later interview, Brockhouse pointed out that his district includes a swath of the West Side. The neighborhood around Del Bravo is emblematic of San Antonio as a whole, he added.

“It was a good place to talk about how the same locations that were struggling 30 years ago are still struggling,” Brockhouse said.

In interviews for this piece, both candidates seemed reticent to discuss the campaign in terms of racial identity, couching their appeal as citywide and focusing on their policy differences with their rival.

Brockhouse said he’s out to end backroom deals, cut taxes and slash regulation. He painted Nirenberg as a failed leader who’s deaf to the needs of businesses and unwilling to chase big economic-development deals like the second Amazon headquarters.

“Which of the members of council is carrying the business community right now?” he asked. “No one can deny it’s me.”

For his part, Nirenberg pointed to record job creation and lower crime under his watch. He pointed to his ambitious proposal to future-proof San Antonio’s transportation system as proof of his leadership.

In the end, San Antonio wants a mayor who’s running on ideas, not just sniping from the wings, Nirenberg said.

“Voters want a vision and a record of success,” he said. “We have both, and he has neither.”

Still, UTSA’s Sanders questions whether heady policy debates, whether over transportation or economic development, will resonate with the majority of voters who turn up on May 4.

“In local elections, the votes tend to be more about how things are right now,” Sanders said. “Do I have to keep putting up with that screwed up traffic on 281? Did my taxes go up?”

In the end, he said, the conventions of ethnic bloc voting are likely to prove more important, especially if voters aren’t motivated to turn out in droves like they did during the November midterms, where they sent a clear signal by approving the anti-Sculley charter amendment.

“There’s a significant chunk of people out there who are not terribly happy,” Sanders said. “The question is whether they’re unhappy enough to go out and vote.”