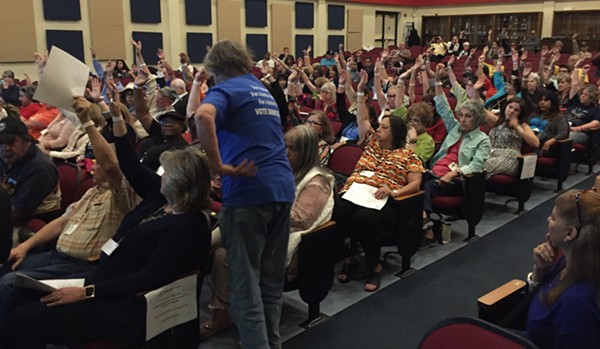 A special meeting early this week of the Bexar County Democratic Party may go down in the group's history as the Monday Night Massacre.

The chairs, in turn, voted overwhelmingly — 98 to 2, in one case — to relieve six officials, including Secretary Garrett Mormando and Treasurer Stephanie Carrillo, of their duties. Another party honcho, Precinct Chair 4015 Adrian Flores, was both stripped of his position and banned from meetings for the next two years.

Video of the meeting is available from NowCastSA.

The gathering was the latest in an increasingly messy food fight between party members loyal to Alcantara and so-called "Manuelistas," whose allegiances lie with Manuel Medina, the longtime chairman voted out last year. Alcantara has claimed Medina backers cut off her access to party records, finances and even the group's Facebook page.

"We're a public organization. Those records are your records," Alcantara told the crowd packed into the auditorium at Eisenhower Middle School for the special meeting.

The ouster votes follow two weeks behind a news conference Alcantara called in front of the Bexar County Courthouse, at which she accused "more than 15" party insiders of potentially committing money laundering, forgery and other crimes. She added that she turned over financial records to the FBI at the urging of Bexar County Sheriff Javier Salazar. 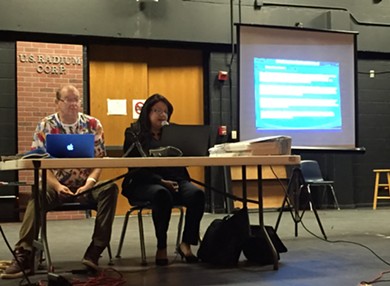 Lack of Respect None of the officials stripped of their duties was present at Monday's meeting, and the Current was unable to reach Mormando, Carrillo and Flores by press time. Medina was present but didn't take the floor when a moderator invited people to speak in defense of those being voted out.

However, during an interview the morning after, the former chairman defended the ousted officials, saying Alcantara is at the root of the organization's discord. He maintains that she made enemies and created chaos by trying to override dissent at meetings. "There's a lack of respect for the rules by the chair and the people surrounding her, which had led to the degree of hostility we see right now," Medina said.  Medina was voted out as chairman last March after losing support within BCDP. Critics accused him of recruiting candidates to run against Democratic incumbents and of courting tea partiers during his unsuccessful 2017 mayoral bid that drew heavily on Trumpian populism. Since then, the organization's monthly meetings — when they happen — have been characterized by shouting matches, bullying, walkouts and at least one visit from SAPD.

Medina acknowledged the chaos but said Alcantara's suggestion that financial crimes took place under his watch is baseless. During the interview, he provided photocopied spreadsheets that he said show payments made to party volunteers during the 2014 election were all handled in the proper manner.

What's more, Medina said during last year's transfer of power he offered to help Alcantara when he could. However, he added, she hasn't contacted him for documents or financial records which could easily clear up her concerns.


"There's an institutional knowledge I possess and that I can share," Medina said.

Regardless of the cause of the infighting, it comes as Democrats prepare for a potentially game-changing 2020 election. Many in the party view it as a chance to continue the rebuke they showed Trump and the GOP in the November midterms.

VIA board member Bob Comeaux, a former BCDP precinct chair and deputy chairman, said continued squabbling is unlikely to affect Democrats' chances in county offices. However, he worries it could rob the organization's effectiveness as it works to mobilize voters in state and national races such as Democratic U.S. Rep. Joaquin Castro's anticipated run for John Cornyn's Senate seat.

"There's only so much energy that can be expended," Comeaux said. "If it's expended on intramural activities that don't mean anything — like this infighting — that doesn't leave you much for the Super Bowl."