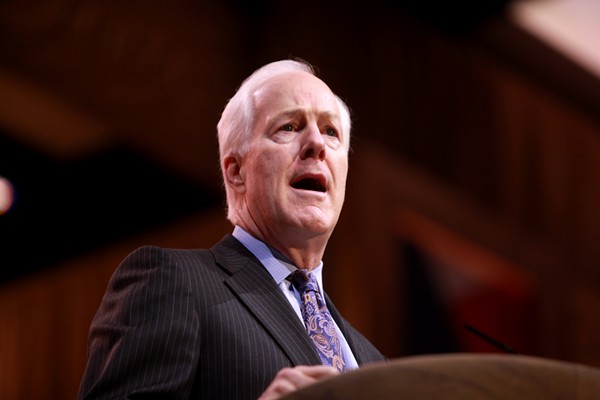 In what could spell trouble as Sen. John Cornyn looks to fire up the base ahead of his 2020 re-election bid, the San Antonio Republican has slipped in standing with an influential conservative group.

A scorecard issued this week by the American Conservative Union ranked Cornyn behind 35 other senators, including fellow Texan and Republican Ted Cruz. The change in status was first reported by the Dallas Morning News.

Cornyn's new score of 77 with the ACU is below his lifetime average of almost 90 with the group. The mean score for GOP senators is 82.

If you're wondering where you've heard of the ACU, it's the group that hosts the annual Conservative Political Action Conference. You know, the major right-wing gathering where President Donald Trump last month gave his chaotic, flag-hugging, two-hour speech.

Cornyn's campaign manager defended his boss to the Morning News, accusing the ACU of being part of the swampy political establishment that the president has repeatedly pledged to drain.

It remains to be seen how much the downgrade will hurt Cornyn's grassroots support from conservatives. Still, he may need all he can get, considering the target painted on his back.

Democrats have made a multi-million-dollar priority of denying the senator a fourth term. Both U.S. Rep. Joaquin Castro, D-San Antonio, and M.J. Hegar, an Air Force vet who ran a close race to defeat Rep. John Carter, R-Round Rock, are said to be contemplating runs for the seat.