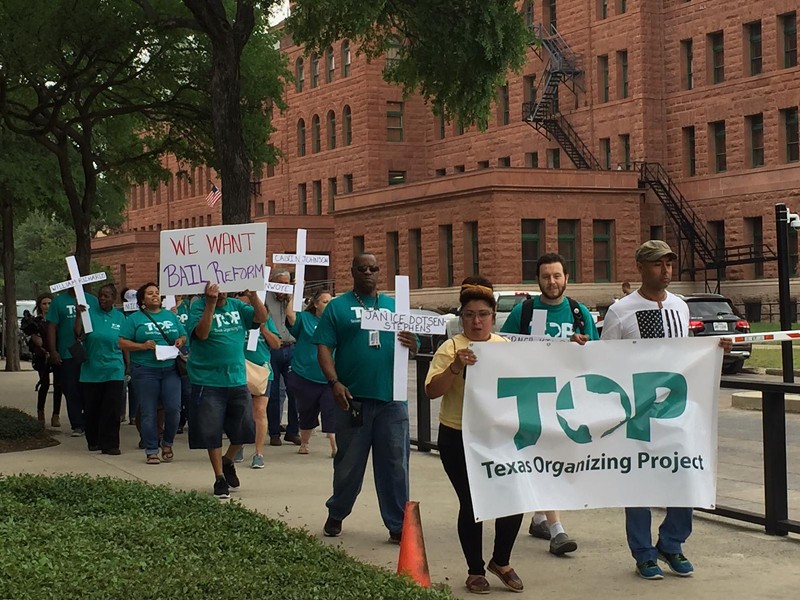 Texas Organizing Project is calling on Bexar County to undertake a major reform of its bail system, citing the deaths of three inmates since December while in county detention.

On Tuesday, several dozen members of the activist group held a protest outside Bexar County Justice Center to draw attention to the recent incidents.

"We believe these individuals would have been able to receive the health care and the help they needed outside of a detention facility," said Raven Peña, a TOP right-to-justice organizer.
In the case of three deaths, individuals were being held for minor infractions but were unable to make bail, Peña said. TOP is urging the county to cite and release more people arrested on minor crimes or allow them to leave on their own recognizance.

In the latest of the incidents, Jack Michael Ule was found unresponsive in his cell April 18 and couldn't be revived by staff, according to the Bexar County Sheriff's Office. Ule — a 63-year-old with a history of mental illness — had been in custody since early in the month on $500 bond for a misdemeanor criminal trespass charge.

Bexar's jail facilities can provide health care and mental health services, Peña said. However, inmates' issues are more likely to receive attention if they are in the care of family or a homeless shelter such as Haven for Hope.

Peña said TOP is encouraged that Bexar County officials, including members of the commissioner's court and new District Attorney Joe Gonzales have called for bail reform. Still, she said they must act to make it a short-term reality.

"The Adult Detention Center should not be used to house the mentally ill or those who simply cannot afford to pay their way out," Salazar said. "I will continue to work with District Attorney Joe Gonzales and Judge Nelson Wolff on a long-term fix."