The San Antonio Conservation Society on Tuesday released its own plan for an Alamo museum that would incorporate the historic Woolworth and Crockett buildings, rather than raze them, which remains an option.

The conservation society’s concern over the fate of the Woolworth building hasn’t waned since drafts of an Alamo Plaza master plan last year showed the demolition of the 1921 building as a possibility to make room for a new museum structure. Even after the City Council approved the plan in October after a five-month public process, the potential for demolition remained.

In December, the society joined three other preservation groups — San Antonio African American Community Archive and Museum, Westside Preservation Alliance, and Esperanza Peace and Justice Center — to form the Woolworth Coalition, which wants the former dime store saved and recognized as one of the first Southern lunch counters to desegregate on March 16, 1960.

The unveiling this week comes as the Texas General Land Office continues negotiating with an unnamed architecture firm to design the Alamo museum, an integral piece of the larger $450 million plan to remake the plaza, said District 1 Councilman Roberto Treviño, who also serves on the Alamo Management Committee. Treviño and other officials have said an assessment of the Crockett, Palace and Woolworth buildings, which is currently underway by John G. Waite Associates Architects of Albany, N.Y., and the design of the Alamo museum would determine the buildings’ fate. 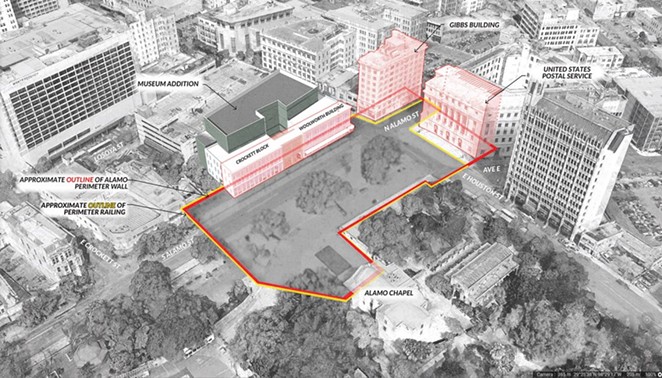 The conservation society’s “compromise” plan shows the 1882 Crockett and Woolworth buildings still standing. The 1923 Palace theater building, which is wedged between the Crockett and Palace, would be demolished for a museum gateway structure that leads into a courtyard. The buildings were built on the location of the 1836 Alamo compound’s west wall and the Treviño house, which served as Lt. Col. William Barret Travis’ quarters. The conservation society wants both histories of the Alamo and the Woolworth building incorporated into the museum.

An arcade would be built over the same area where the Alamo’s west wall once stood.

“The arcade leads visitors to areas within the Woolworth building footprint that includes the approximate locations of the Treviño house that served as the Travis’ headquarters, and the Castañeda house … also includes space to interpret the Woolworth lunch counter,” said Susan Beavin, conservation society president. 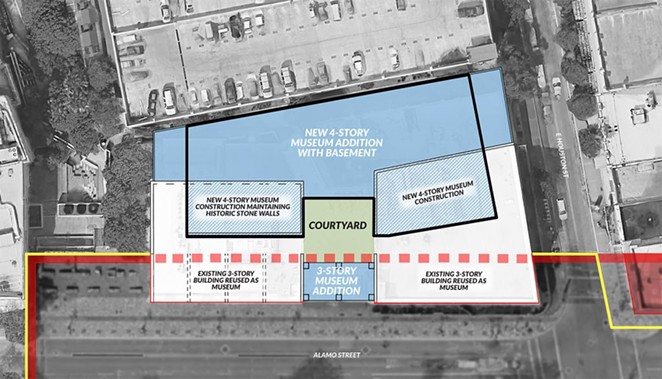 The plan also calls for the construction of a four-story museum extension, including a basement, on the remaining space between the buildings and a parking garage west of the plaza.

In the plan, the conservation society concedes the inclusion of a barrier that outlines the Alamo compound walls on the plaza—an aspect of the plan the group vehemently opposed for most of the public process last year.

The proposal has drawn harsh criticism from Treviño and Alamo CEO Douglass McDonald. Treviño said the conservation society’s plan raises ethical questions in regards to the the request for qualifications (RFQ) process, in which more than 30 architecture firms applied for the job. Alamo Architects of San Antonio, which produced the conservation society’s massing study, was not one of the more than 30 firms.

“I just find it very, very problematic,” Treviño said. “We find ourselves in a position where—what’s to say every project in the future doesn’t go through this kind of an insertion by a group who decides they want their design or their architect, to insert their values into it? And skip all the process of an RFQ (request for qualifications) and an evaluation? How do you justify that?”

Beavin said Tuesday’s press conference was the conservation society and coalition’s attempt to promulgate the significance of the Woolworth building.

In a statement, McDonald said the Battle of the Alamo is what the site is known for, that it’s the only place in the world where that history can be told.

“We are committed to honor all the history of this site,” McDonald said. “However, the story of the Texas Revolution is what the world comes expecting to learn here and what Texans expect to be honored.”

The Woolworth on Alamo and Houston streets was one of several lunch counters to peacefully desegregate in March 1960, following an agreement between local faith and business leaders.

Everett Fly, a local historian and landscape architect who went to the Woolworth lunch counter as a boy, argued the building is important because of its prominent location at Alamo and Houston streets, which was a major intersection for bus routes at the time. And for another reason, he described.

“San Antonio, despite our infrastructure, despite our policies, despite our rhetoric about being inclusive, San Antonio has a very poor record of preserving, conserving, acknowledging and celebrating African-American history and culture particularly physical landmark and sites such as this,” Fly said. 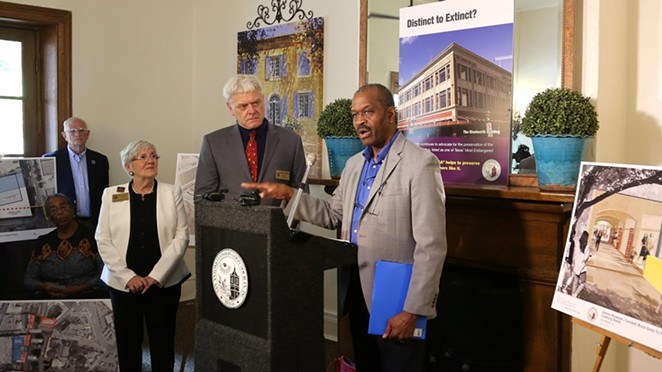 On Friday, the conservation society will appear before the Texas Historical Commission to request the Woolworth be designated a state antiquities landmark, which, Beavin said, won’t completely save the building from demolition, but it could help. The building is already listed on the National Register of Historic Places.

According to the city of San Antonio, which, in December, agreed to lease Alamo Plaza to the state of Texas for 50 years with two 25-year extensions, the Alamo museum architect will be announced “in the next few weeks.” The firm Waite Associates will complete its assessment of the Crockett, Palace and Woolworth buildings this summer.

Treviño described the assessment as one that looks at “what is historic, what has been removed, what is missing, what is original, what is not original” from the three buildings.

Treviño also said another firm will also be hired to conduct a cultural assessment of the buildings.