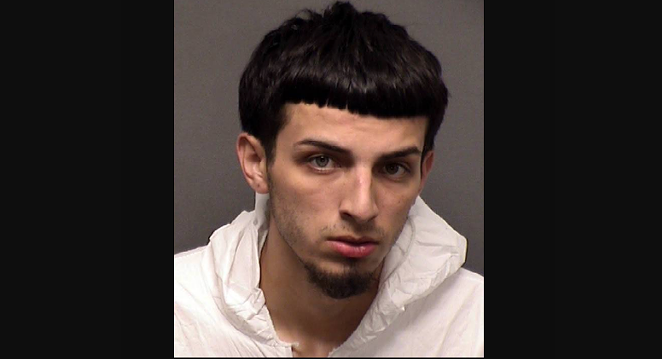 A man is in police custody following a two separate robberies in which police say he punched an elderly man and pepper-sprayed another.

According to an arrest affidavit obtained by KSAT, Gabriel Anthony Gonzales, 19, robbed a Walgreens on Nacogdoches Road last Tuesday. The report indicates that Gonzales and a woman, who was not named in the affidavit, walked into the store around 10:30 p.m. and asked for change for a dollar.

Gonzales attempted to grab money when the cashier opened the register. The 72-year-old cashier backed away, though, and Gonzales reportedly punched the man while the unnamed woman pepper-sprayed him. KSAT reports that the pair got away with the "cash door" from the register but were unable to access the money.

The next incident included in the affidavit took place on Thursday. Gonzales and 18-year-old Presley Renee Lara reportedly went to Solar Nails Studio on Huebner Road to have Lara's nails touched up. Gonzales sat next to Lara as an employee worked on her nails and told Lara to wait in the car once the employee finished.

Instead of paying for the services, Gonzales pepper-sprayed the employee and stole a bank bag from underneath the register. Gonzales and Lara fled the scene, but a surveillance camera captured footage of their vehicle.

Officers tracked down the vehicle during a routine traffic stop Saturday, at which time Lara was arrested for driving without a license. She was taken into custody and questioned about the nail salon robbery. Lara said she and Gonzales attempted to cash checks stolen from the salon, but the bank refused to do so.

Gonzales has since been charged with aggravated robbery, robbery and possession of a controlled substance.