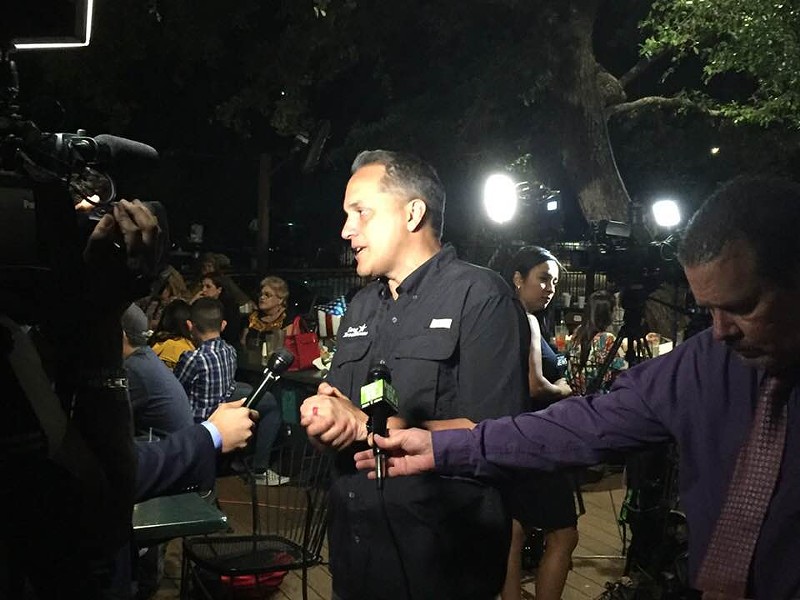 The group Mētú — whose name plays on the #MeToo Twitter hashtag used to out famous perpetrators of sexual assaults — quietly posted the petition three days ago before calling a Monday news conference. At 3:30 p.m., its change.org petition had nearly 500 signatures.

In an emailed statement, Brockhouse called the allegations of domestic violence — one reportedly made my an ex-wife and another from his current spouse — false and argued his opponent, incumbent Mayor Ron Nirenberg, "is trying to destroy my family by spreading lies so he can stay in power."

The email also included a statement from Brockhouse's wife, Annalisa, who said she would never stay in an abusive relationship or allow her children to remain in an abusive environment.

A June 8 runoff between Nirenberg and Brockhouse, a one-term District 6 councilman, will determine who becomes San Antonio's next mayor.

The Mētú petition points out that there were 28 domestic violence-related murders in San Antonio last year, quadruple the number in 2015.

“Some of us are survivors of domestic abuse, all of us are horrified that a man who has been accused of domestic violence by both a former and current wife might well become the mayor of the 7th largest city in the country,” reads the group's statement.

The petition also states that local organizations working to end domestic violence have been fearful to call out Brockhouse because, if elected, he could use his power to withhold funding from groups that speak up.

The Brockhouse campaign disputed that claim, again getting in a dig at Nirenberg.

"As Mayor, Greg Brockhouse will consistently work to advance solutions to the domestic violence epidemic in our city," said its emailed statement. "After ignoring the issue for two years, Ron Nirenberg only raised it recently in a shameless attempt to win votes.”

In addition to the allegations of abuse, Brockhouse has reportedly been hit with liens over his failure to pay child support and faced allegations of misogyny over his aggressive questioning of SAWS board appointee Amy Hardberger.