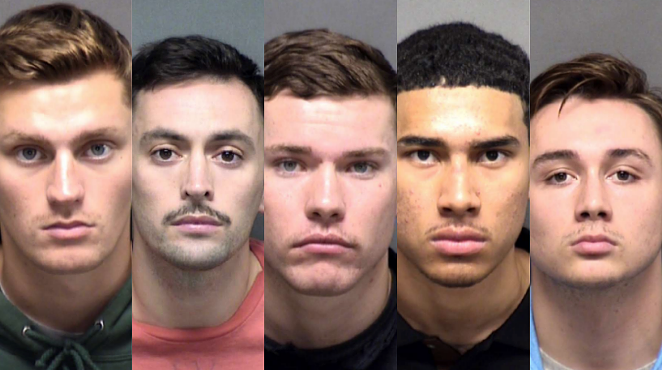 Earlier reports named Dominick Burns, 20; Mauricio Chaparro, 28; Anthony Cooney, 21; Kenneth Johnson, 20; and Kyle Tuschmann, 19, as the five U.S. Navy servicemen accused of sexually assaulting a woman in San Marcos. Now, an arrest affidavit obtained by MySA.com reveals that the gang rape occurred in the back of pickup truck at a park in the Texas town.

According to the affidavit, police were called to Rio Vista Park on the night of May 19, 2018. A woman told officers she was sexually assaulted in a truck by six men. KSAT reports that Burns, Cooney and Tuschmann are all "accused of physically taking part in the sexual assault." Chaparro and Johnson are named in the indictment, though their actions are not described in the reports.

The woman was allegedly unwilling to cooperate that night and said she didn't want to press charges. However, the next day, she changed her mind and went to police to file a report.

While the servicemen were all named in the police report, the sixth suspect has not been identified. Authorities have not indicated whether they are searching for a final suspect. Each of the men was charged with four counts of aggravated sexual assault. Bail was set at $500,000 each.

MySA.com reports that the Navy is cooperating with the investigation.