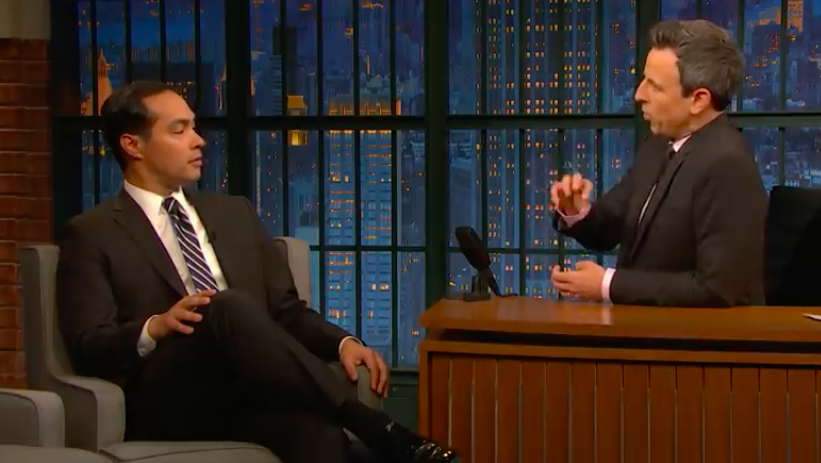 During a late-night talkshow appearance, former Housing and Urban Development secretary Julian Castro unloaded with both barrels — verbally, anyway — on the current head of that federal department.

Castro, a former San Antonio mayor now chasing the Democratic presidential nomination, told host Seth Meyers that HUD Secretary Ben Carson "seems to think that if you're poor, that there's something wrong with you."

Carson is the guy who once declared poverty was simply a "state of mind" and subsequently sought to jack up rents for public housing's most destitute tenants. And, this week, his department proposed a new rule to gut protections for transgender people, just a day after he testified to Congress he'd do nothing of the sort.

"Well, I mean, his hearing yesterday was like watching a slow-motion train wreck until they got to the Oreo part. And then it was like, 'Oh, man,'" Castro said. "I was telling some folks yesterday, that it was — this was one of the classic cases of, 'It would be funny if it weren't so sad.'"

Of course, Castro was speaking of Carson's inability to understand the common housing term REO (or real-estate owned) when it was used by one of his questioners, instead putting on a confused look and replying, "Oreo?"

But not all the barbs were reserved for Carson. Castro also got in a good-natured dig at twin brother Joaquin Castro, a Democratic congressman.

"Two months ago, [Joaquin] grew a beard so that people could tell us apart," Castro said. "And then he realized it looked so bad that it wasn't worth it, and he shaved it four weeks later."