City Nears Hays Street Bridge Land Deal, But Is It What the Restoration Group’s Been Fighting For? 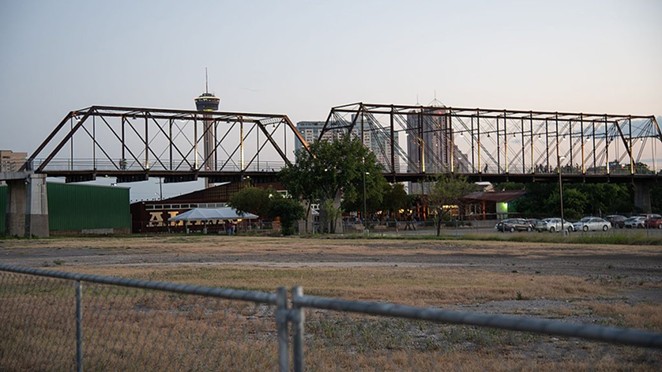 As the city of San Antonio gets closer to regaining ownership of a contentious piece of property at 803 N. Cherry St., north of the Hays Street Bridge, the group responsible for the take-back sees two major problems with the potential outcome.

The Hays Street Bridge Restoration Group, which, nearly 20 years ago, began the effort to rehab the decaying bridge into the pedestrian and cyclist destination it is today, wants the 1.7-acre property to become a park with restrooms and parking for visitors of the bridge.

It’s concerned, however, that these latest talks between city officials, their group and nearby neighborhoods will result in a different fate for the property.

District 2 Councilman Art Hall, who’s says he’s “very close” to closing the deal with the current owner, said the extent of his involvement is to get the land returned to the city before he leaves office on June 19. After that, he said, it’s up to the community and City Council to decide the property’s best use.

With that uncertainty, the group says it’s prepared to continue its fight in court, which it started seven years ago when the city first attempted to sell the land to a developer.

The restoration group says the property should complement the bridge as a park, which it says was the agreement at the time of a 2002 memorandum of understanding (MOU) between the city and the group.

“Certainly, some other private use would be a violation of the contract (MOU),” said Amy Kastely, the group’s pro bono lawyer. “You know, we’re open to how the land will be used for the Hays Street Bridge project. (There is) a limitation on what the city will do with that land once it’s returned.”

In 2012, the city first tried to sell the land to Alamo Beer Co. owner Eugene Simor. That’s when the group sued the city, saying it had violated the MOU.

In December 2014, four months after a jury verdict found that the city had violated the MOU by attempting to sell the property to Simor, the city sold the land to Simor, anyway. Two years later, Simor sold the land to a group headed by developer Mitch Meyer.

In an interview last week, Councilman Hall said the city and Meyer are “very close” to a land swap that would return ownership of land back to the city. In exchange, Meyer will receive roughly half of a city-owned 3.9-acre piece of land at 223 S. Cherry St., near the Alamodome.

“We’d basically be breaking up that 223 S. Cherry St. property, then we’d trade,” Hall said. “We’d have about two acres left over. The city could still (allocate) the remaining portion for commercial or (issue a request for proposal) for housing.”

But the group is concerned the city is giving up the property on South Cherry Street it had reserved for affordable housing in order to make this current deal happen.

Last year, when city officials were pitching to the City Council a revamped downtown housing incentive policy, they proposed the city could leverage some of the property it owns in the downtown area, including the one at 223 S. Cherry St., into affordable housing.

Graciela Sanchez, director of the Esperanza Peace & Justice Center, who’s also a member of the restoration group, said the group is concerned Meyer will profit from the swap—that the value of the property on South Cherry is worth considerably more than the property on North Cherry. The property on North Cherry, which is actually two properties according to land records, was valued collectively at $546,110. The Bexar Appraisal District does not list an appraised value for the the city-owned property on South Cherry, next to the dome, because it is tax exempt.

Assistant City Manager Lori Houston declined to give the appraised value of the South Cherry property.

“Until we have completed negotiations, we will not released the appraisal,” Houston said.

The deal so far only involves a land swap, Hall said.

Meyer has been planning to build a five-story, 127-unit market-rate apartment building on the North Cherry property. In a previous interview with the Heron, Meyer said the original intent was to provide some affordable housing in the project, but construction costs have risen since the start of the project has been delayed because of the litigation, and thus the project was last planned as market-rate only.

Meyer did not respond to interview requests for this story.

Hall said a public process, which would include the adjacent Dignowity Hill neighborhood, would determine the property’s ultimate use.

“From there, the new council member and the community can have a discussion as to what’s going to happen on that property—whether it be a park or some other use,” said Hall, who will be replaced on the council either by Keith Toney or Jada Andrews-Sullivan, the two council candidates headed toward a June 8 runoff for the East Side seat. 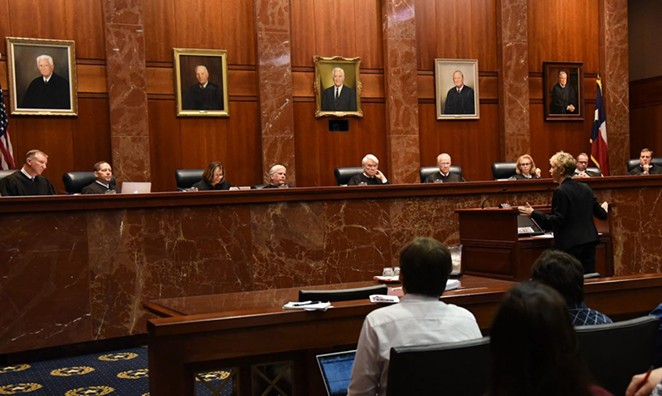 The last time the dispute was in a courtroom was last September, when layers working for the city and Kastely made their arguments before the Texas Supreme Court.

In March, Texas’ highest court ruled in favor of the group, and said San Antonio’s governmental immunity, a state statute that shields governments from frivolous lawsuits, was waved. The decision essentially returned the case to the 4th Court of Appeals, where the city recently dropped its appeal of the 2014 decision at the district court level that said the city had reneged on the 2002 MOU.

In September 2014, a jury verdict found the city had violated the MOU. It also determined the city never held the land as a park. Judge David Canales ordered the city to “allocate, apply and use all funds” raised by the restoration group, “including the property at 803 North Cherry,” for the bridge project costs.

The jury determined the word “funds,” in the MOU, to mean money and in-kind donations (such as the donated land). While the group took Canales’ verdict to mean the land itself should be used for the project, the city interpreted the ruling to mean it could sell the land (which it did; to Meyer) and use those funds for the bridge.

In an email in late March, Houston said funds used from the sale of the property — $295,000 — was used for landscaping, lighting, restoration of the bridge and rebuilding the bridge’s approaches. In its ruling, the Texas Supreme Court pointed out that the city never provided evidence that proceeds from the land sale was used for the bridge.

When the Heron asked Houston to provide documentation of the city’s expenditures, a city spokeswoman replied, “You’re getting into details that may be brought up in future litigation. Per the City Attorney, we are not going to comment further.”

The high court also dismissed a document titled “Declaration of Lori Houston,” in which Houston makes the same claims, because the paper didn’t meet the legal requirements for a declaration in lieu of an affidavit.

So back to the district court level is where the case is headed, if the restoration group chooses to.

All along, the group has argued a development on the North Cherry land would block views of the bridge from the corner of Cherry and Lamar streets. They also say a market-rate apartment project would hasten the gentrification process ongoing in Dignowity Hill.

Kastely said the current courtroom battle or Hall’s negotiations could both lead to an outcome where the land becomes a park.

“We’ve never followed through with that, and now we’re coming up with new solutions,” Kastely said of some of the options that have been tossed around in Hall’s negotiations, such as a possible affordable housing development. “Other solutions that are going to block the view is not something the restoration group or coalition is interested in seeing.”

Kastely said if the city offered a deal that allocated the land on North Cherry as a park for the bridge, she would advise the group take it.

“That’s everything we can get in the lawsuit,” she said.

In late March, Mayor Ron Nirenberg said he didn’t want the city to be involved in any further court hearings regarding the case.

“I don’t believe we should be pursuing any legal action, any further,” Nirenberg said.