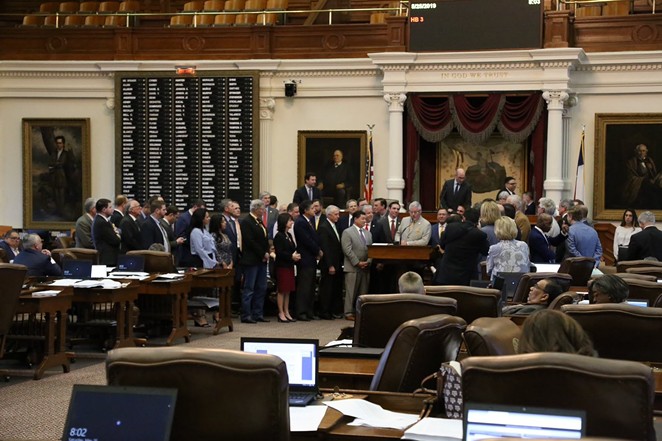 Remember when Texas Republicans’ biggest fear was the wrath of the Tea Party?

Not anymore. The recently wrapped 2019 legislative session showed that the party controlling both the state’s governorship and legislative branch is now more afraid of the wrath of mainstream voters, political watchers say.

Sure, there were plenty hard-core conservative plays during the session — among them, the controversial “Save Chick-fil-A” bill, a pair of significant anti-abortion measures and a scuttled last-minute attempt to funnel $100 million into border security.

“It was sort of like Stockholm Syndrome, where you felt blessed for small mercies like there being no Bathroom Bill,” Southern Methodist University political scientist Cal Jillson said, referring to a condition where hostages develop psychological alliances with their captors.

Even so, Jillson added, “I do think that Republican leaders did everything they could to signal to voters that they could focus on bread-and-butter issues.”

Also moderating the Lege’s most conservative tendencies was the presence of more Democrats. November’s blue wave brought a gain of 12 House seats and two in the Senate, allowing the party to form an effective roadblock against some, but not all, of the most partisan measures pushed by GOP lawmakers.

“If there was one time that showed how a change in the makeup of the legislature would change the outcome of the session, this was it,” said Texas Sen. Jose Menendez, D-San Antonio.

Still, it’s hard to call the 2019 session a win for progressives.

The Lege continued to push a business-friendly agenda that raised the ire of environmentalists, for example. And it again declined to expand Medicaid, even as a new report shows 146,000 fewer Texas children were enrolled in Medicaid and the Children’s Health Insurance Program between the end of 2017 and the end of last year.

In the end, though, this session may be remembered as the one where social conservatives finally started to lose their grip. And with the 2020 elections likely another referendum on Trump, it’s possible Democrats may further erode that dominance.

What follows is a rundown of how some of the biggest issues that played out in the session.

However, critics charge that much of the tax relief passed during the session will benefit the richest Texans while doing little for the poorest and middle class. What’s more, tax experts recently told the Dallas Morning News that appraisal increases will likely exceed the property tax reductions passed this session by the Lege.

This session’s omnibus school funding bill includes $6.5 billion in new money for public schools to cover raises for teachers, counselors, nurses and librarians. It also kicks in additional per-pupil funding and provides full-day pre-K. However, experts caution that it should be seen as a start, not an ultimate solution to the state’s public education woes.

“You’ve got to count the funding as win,” Jillson said. “But it’s a fairly modest win that will evaporate over time. Unless we continue to add to public education, we’re never going to make up for the Legislature’s earlier funding cuts.”

Getting less attention, but also noteworthy, was a bill preventing the state from revoking someone’s professional license in event they defaulted on student loans. That measure passed with bipartisan support and awaits the governor’s signature.

A bill with unanimous Senate support is poised to expand the state’s currently ultra-limited Compassionate Use Act and allow the legal use of low-THC medical cannabis to treat multiple sclerosis, ALS, terminal cancer, autism, epilepsy and seizure disorders. As a result, about a million additional Texans could gain access to medical marijuana.

Still, lawmakers didn’t include post-traumatic stress disorder on the list — a move that cuts veterans off from potential relief, advocates argue. And while the bill lowers the required number of doctor approvals from two to one, the state’s approved registry includes just 30 doctors, mostly in larger cities. That, critics charge, leaves many rural residents without relief.
LGBTQ Issues

One of the worst attacks on LGBTQ Texans — a measure that would have gutted the antidiscrimination ordinances of cities including San Antonio — didn’t survive the session.

However, the Lege still passed the so-called “Save Chick-fil-A” bill, which supporters claim would protect religious freedom by stopping government from taking “any adverse action” against businesses or people based on their religious beliefs. LGBTQ advocates, however, warn it would essentially hand Texans a right to discriminate.

Members of the newly created House LGBTQ Caucus managed to shut down the bill with a procedural maneuver only to have it resurrected by Republican members. The measure is expected to receive Abbott’s approval.

Anti-abortion groups seized two major victories during the session. One came when lawmakers passed a bill protecting babies born alive after abortion attempts — a rare circumstance, according to medical professionals. The second, and more controversial, win happened with the passage of a bill to ban cities from doing business with Planned Parenthood and other groups that provide abortions.

However, in what observers say is a sign of social conservatives’ slipping power in Austin, Texas lawmakers didn’t go to the extremes of those in Missouri, Alabama and Georgia, which recently passed laws outlawing abortion except in the first few weeks of pregnancy.

During the waning hours of the session, lawmakers approved an energy industry-supported measure making it a felony for protesters to interrupt the construction of oil pipelines. Under the bill, “impairing or interrupting” a pipeline would become a felony punishable by up to two years behind bars. Damaging a pipeline during construction would carry even stiffer penalties, becoming a third-degree felony with up to 10 years in prison time.

“This was a travesty,” said Robin Schneider, executive director of Texas Campaign for the Environment, adding that the proposal is an assault on the free-speech rights of landowners, indigenous groups and environmental activists.