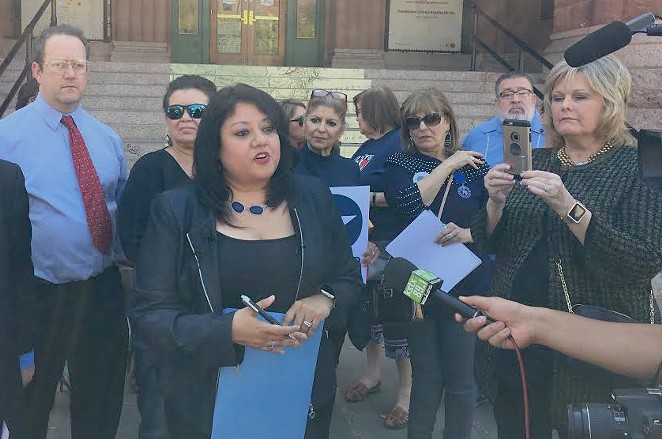 After manifesting in court battles , votes to remove key officials and allegations of money laundering , the internal power struggles at the Bexar County Democratic Party are now playing out in dueling same-day meetings.

A recently emailed flyer for a Tuesday, June 11 meeting of the Bexar Democrats at Winston Churchill High School warns that an imposter meeting has been scheduled the same night by breakaway precinct chairs.

"A postcard and emails calling for a meeting on this same date at the Central Library have been sent out," reads the message signed by BCDP Chairwoman Monica Alcantara. "These are the disruptive actions of a small group of precinct chairs. Please ignore these unauthorized notices and DO NOT ATTEND the meeting at the Central Library."

The flyer also cautions that emails sent out by the faction mention an imposter website and include links to Facebook pages not affiliated with the local party.

Alcantara has been locked in a months-long battle for control of the BCDP. Since being elected last year, she's faced blowback from members loyal to Manuel Medina, the longtime chairman she beat out for the position.

Alcantara's opponents — which include at least two ousted officers — accuse her of quashing dissent by forcing out those who disagree with her.

Both Democratic elected officials and political experts have cautioned that the infighting may hurt the party's ability to mobilize San Antonio-area voters in 2020.

At the bottom of the emailed flyer, Alcantara's signature includes the message "Remember, when Democrats work together, Democrats win."

For now, it seems the "working together" part may be a long way off.