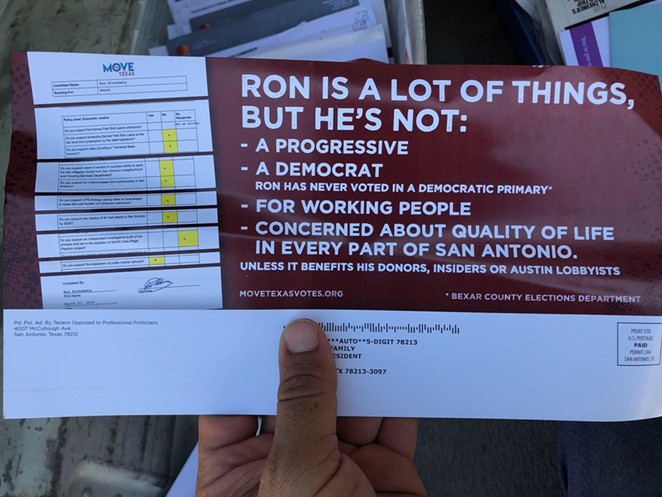 Now, both MOVE Texas — which said it never granted permission to use its logo or survey — and progressive group Texas Organizing Project, whose acronym is one letter removed from TOPP, say they're furious the PAC tried to associate them with what they're calling a voter-suppression attempt.

“We stood up for the fact that we're strictly nonpartisan and issue-based,” Galloway said. ​"I was disappointed to see our brand on the flyer. This kind of flyer doesn't represent our organization, and it's not the way to increase civic engagement in the political process."

Mark Rubalcava, listed as TOPP's treasurer in its state regulatory filings, declined to speak to the Current via phone. However, he did respond via text message.

"Our non-partisan general purpose PAC has not received any communication from Move On [sic]," his statement read, "and we disagree that we are being characterized as 'a partisan group' and with this reporter's assertion about the use of Ron's publicly available answers on Move On's [sic] public voter guide ... is somehow in violation of accepted practices and uses and applicable laws."

Nirenberg last weekend won a narrow victory over populist challenger Greg Brockhouse, who had the backing of San Antonio's police and fire unions and has done extensive political consulting work for both organizations.

In a state regulatory filing, TOPP reported total political expenditures of $44,350 for the election, much spent on anti-Nirenberg ad buys. At $20,000, the group's largest contributor was the San Antonio Fire & Police Pensioners Association PAC.

TOPP's mailer accused Nirenberg, who received the backing of both the Texas Organizing Project and the Texas Democratic Party, of being a faux progressive unconcerned with working people and more worried about "donors, insiders or Austin lobbyists."

It also erroneously claimed the mayor had never voted in a Democratic primary. According to Bexar County election records, which date back to 2001, Nirenberg voted in the March 2008 primary as a Democrat. He's never cast a ballot in a Republican primary during that time, according the election data.

MOVE Texas solicited answers from both Nirenberg and Brockhouse for the survey pictured on the flyer, Galloway said. Brockhouse never responded.

Michelle Tremillo, executive director of the Texas Organizing Project said the recently formed TOPP's similar acronym was not coincidental. Instead, the PAC hoped to confuse progressive voters in a bid to make some sit out the election, she added.

"We work year-round to engage and inform voters, and we don't use these kind of tactics," Tremillo said. "These kind of tactics do not increase voter participation. To use our name to suppress the vote is extremely disturbing. It's inexcusable and it reeks of desperation."