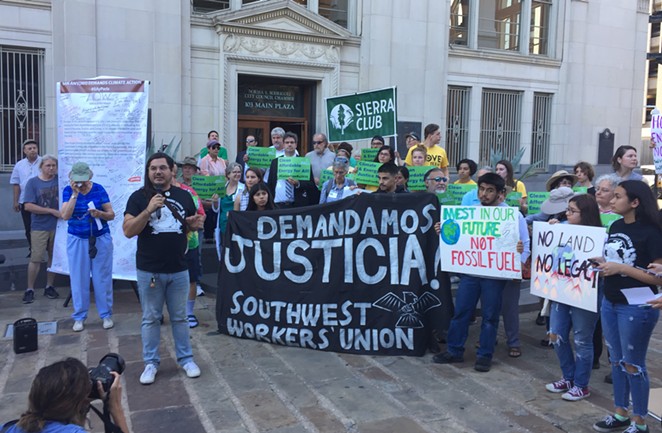 And, in what's a likely sign of contentious debate to come, the conservative think tank Texas Public Policy Foundation held a competing forum at the city's downtown library to rail against the city's efforts. The Koch Brothers-funded group has been a frequent advocate for Texas' fossil-fuels interests.

The SA Climate Ready plan, championed by Mayor Ron Nirenberg, lays out goals for the city to mitigate its impact on the climate by sharply reducing greenhouse gas emissions. After months of discussion, city leaders pushed back final debate on the measure until after the recent mayoral election, saying they wanted more public buy-in.

However, speakers at the pro-plan rally, including Esperanza Peace & Justice Center Director Graciela Sanchez, said the delay was the result of pressure from business interests such as San Antonio-based refiner Valero Energy Corp.

Other speakers pointed to the social justice implications of climate change, arguing that the city's poor and minority communities face the most risk from pollution, spiking temperatures and increasingly volatile weather.

"We're not here talking about something in the abstract," said Beto Davila DeLeon of the Southwest Workers Union. "We're talking about things that are making our families sick."

Business groups have criticized SA Climate Ready for its lack of specific numbers to address the expense of implementing its goals.

Much of the discussion at the TPPF forum focused on that criticism, according to an Express-News report. Foundation fellow Jason Isaac told the audience that the plan would run up billions in costs as the city converts its bus fleet to electric power.

However, at the rally outside council chambers, the Texas Sierra Club's Greg Harman — who served on the plan's steering committee — said such complaints are disingenuous. Business groups, including energy companies and the San Antonio Manufacturers Association, had a chance to participate in steering the direction of the plan but chose to sit on the sidelines.

"Shame on the council for declining to act and pushing this back," Harman said.