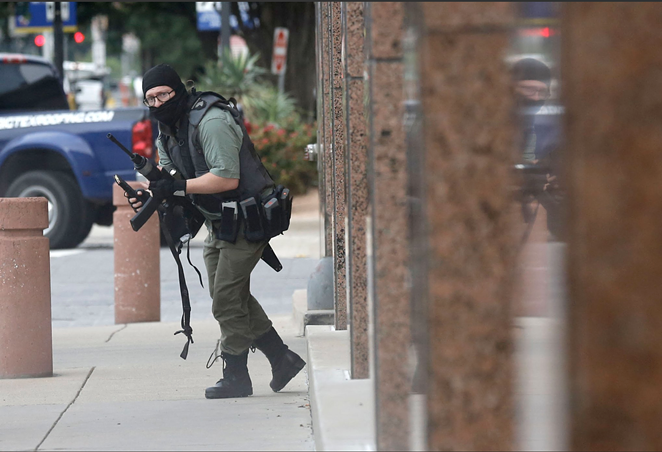 When Dallas Morning News staff photographer Tom Fox got up on Monday morning, he likely didn't expect to be at the epicenter of an attempted mass shooting.

According to the Dallas Morning News, a gunman identified by authorities as Brian Issack Clyde, 22, opened fire on the downtown Dallas federal courthouse. As he approached the door of the building, Fox was standing right outside – in a video shot from a nearby building by witness Tim Brown, you can see Fox hiding behind a pillar as Clyde shoots at the door and wall of the courthouse before retreating to a parking lot across the street. He was carrying more than five 30-round magazines of ammunition.

Clyde was shot by law enforcement personnel and died at the scene. Miraculously, no one else has been reported injured as of press time. After the shooting, authorities detonated a suspicious device found in the 2003 Nissan Altima that Clyde drove to the courthouse.
The incident took place shortly before Dallas' new mayor, Eric Johnson, and new city council were sworn in for their first day on the job, and only one block away from the site of the July 7, 2016 shooting in which four Dallas police officers and one Dallas Area Rapid Transit officer were killed.

Before his Facebook profile was shut down, reporter Dana Branham scraped it for as much information about Clyde as possible, but he left behind no manifesto nor other obvious evidence that would point to a motive. Clyde was not previously under investigation by law enforcement.