Until Donald Trump tweeted out his plans to ban transgender troops from entering the military, Tech Sgt. Jamie Hash never felt unwelcome during her eight years in the U.S. Air Force.

Indeed, when she informed her supervisor in June 2016 of her pending transition, the response was supportive and encouraging. And when she reenlisted in November for another six-year hitch, the Air Force had no problem allowing her to conduct the ceremony at the rainbow crosswalk in San Antonio’s gay nightlife district.

“It’s been a non-issue for me. All the military cares about is performance,” said Hash, 31. “I briefed a two-star general at the Pentagon, and not one word was mentioned [about my gender].”

She added: “I don’t consider myself an exception, but rather one example of the ability of transgender military personnel to serve our country.”

But, now, three years after the Obama administration made it possible for transgender people to openly serve, Trump has switched course and implemented a new policy that critics say amounts to an outright ban on new transgender recruits. LGBTQ advocates worry the policy will also embolden bigots to discriminate against personnel such as Hash who are already serving.

“The ban has sent a signal to transphobic people in the military that it’s now open season on transgender personnel,” said Aaron Belkin, director of the Palm Center, a San Francisco-based think tank that studies LGBTQ issues.

While the evidence of harassment is largely anecdotal this early on, Belkin said the data — once available — is likely to mirror that collected under the military’s “don’t ask, don’t tell” policy. During that era, harassment of gay service members increased, only making a substantial decline once the rule was overturned.

According to a recent Rand Corp. study commissioned by the Pentagon, there were an estimated 10,790 transgender people serving in the U.S. military and reserves in 2016. It’s unclear how many are stationed in San Antonio, but Hash said she’s encountered others.

In April, after the Pentagon released details about how it would implement Trump’s ban, Pride Center San Antonio received calls from concerned personnel seeking more information and access to legal resources.

“That tells me it’s an issue here and that people are concerned,” said Robert Salcido, the center’s director.

Increasing the worry for LGBTQ advocates, a U.S. appeals court handed Trump a victory last week when it ordered another federal judge to reconsider her ruling against the policy. In January, the U.S. Supreme Court put a hold on the Seattle judge’s nationwide injunction, clearing the ban to take effect. 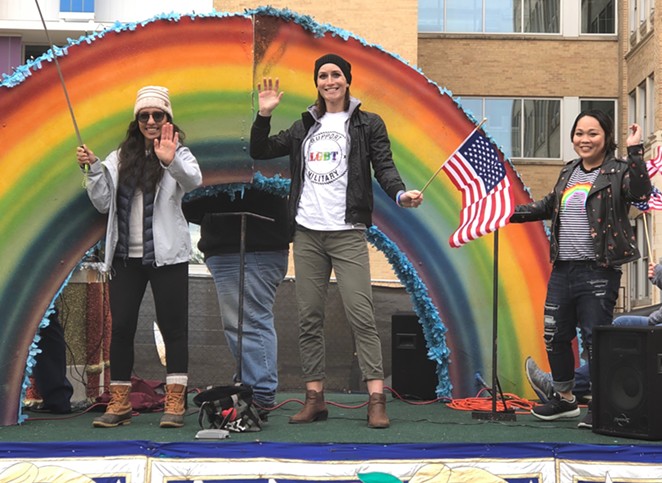 Despite the court victory for Trump, recent polls show the president has failed to win public support for the ban.

What’s more, the Pentagon has issued a statement contradicting Trump’s claim during his recent trip to Britain that transgender individuals can’t serve because military personnel are prohibited from taking “any drugs.” Under current law, troops are allowed to take all prescribed medications, including hormone treatments for gender dysphoria, officials pointed out.

“The reason for all of the president’s statements is straightforward,” said Belkin of the Palm Center. “The administration doesn’t want to reveal the real reason for what it’s doing, which is to cater to its base.”

“It’s unprecedented to invite a group of people into the military and then kick them out,” he said. “History is not on the president’s side.”
Hash agrees.

The Air Force recently invited her to speak to a group of 100 new non-commissioned officers, sharing advice on how they could better support transgender personnel. She was pleasantly surprised by the response. Even after a robust Q&A session, several approached her following the talk to keep the conversation going.

“The military has always been a social experiment,” Hash said. “That’s been the case with desegregation, with women in the workplace. … Policy in the military sends ripples through society. It always has.”