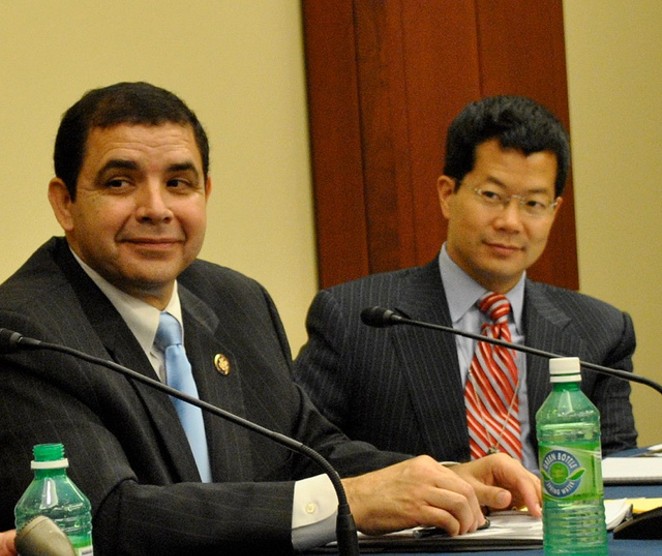 U.S. Rep. Henry Cuellar is pushing for $60 million in federal funds to reimburse organizations in San Antonio and other Texas cities that have aided Central American migrants.

The money would be made available directly from the Federal Emergency Management Agency, since the State of Texas failed to help distribute $100 million in federal funds included in a similar 2014 bill, said Cuellar, D-Laredo. The state only paid out $400,000 from that earlier pot of money, he added.

"With all due respect, the State of Texas didn't do what it was supposed to do," Cuellar said, adding: "If we keep doing the same thing, [the charities] are never going to get any money."

Between March 30 and mid-May, some 8,000 asylum seekers traveled through San Antonio to settle with host families. Groups including Catholic Charities, the San Antonio Food Bank and Travis Park Church provide food and shelter for the migrants, racking up tens of thousands of dollars in expenditures.

Cuellar's proposed funding would come as part of an emergency appropriations bill that also includes $4.5 billion in support for Customs and Border Protection, Heath and Human Services and other agencies dealing with the influx of asylum seekers.

In addition, Cuellar has asked for $200 million for a one-stop-shop processing center and for guidelines requiring centers housing immigrants treat them with "dignity and respect." Health and legal professionals say young migrants are being held in dangerous and inhumane conditions in Texas holding facilities.

The Democratically controlled House is expected to vote on Cuellar's measure tomorrow. A vote on a similar bill is expected Thursday in the Republican-run Senate. Cuellar said he hopes the houses can reconcile differences between their proposals before the July 4 holiday.

Cuellar's language requires that the $60 million in reimbursement become available within 30 days of the bill being signed into law. Agencies would need to apply for the money and provide documentation of their expenditures.
"We're going to get this passed, and we're trying to get the money pushed over within 30 days," he said.