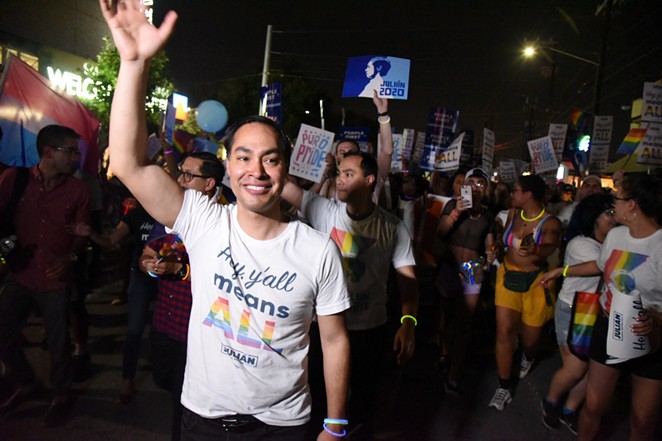 Fresh off his well-received performance in the first Democratic presidential debate, Castro marched in San Antonio's Pride Bigger Than Texas Parade Saturday night with twin brother U.S. Rep. Joaquin Castro. In contrast to other participating politicos, the two didn't ride in a car but hoofed it along the route, shaking hands and snapping selfies.

Early the following morning, the former Obama housing secretary made the rounds on political talk shows, putting in appearances on CNN's State of the Union, ABC's This Week and NBC's Meet the Press. Castro spent much of his air time discussing immigration, but during his ABC appearance he also jabbed at President Trump for his weekend meeting with North Korean dictator Kim Jong-un.

"What's happened here is that this president has raised the profile of a dictator like Kim Jong-un and now three times visited with him unsuccessfully, because he's doing it backward," Castro said.

On State of the Union, Castro also called Trump's son, Don Jr., a "coward" for sharing and then deleting a racist tweet about fellow Democratic presidential aspirant Kamala Harris.