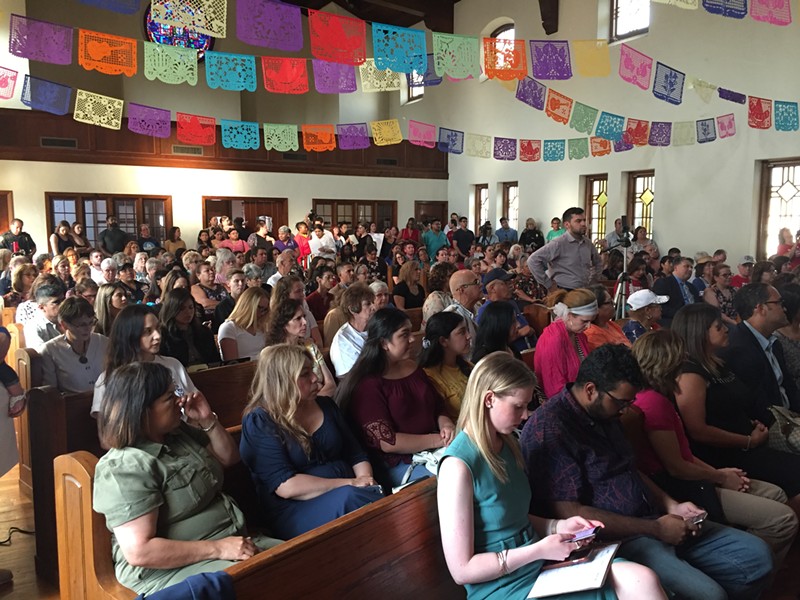 Last year, 25 San Antonians died in domestic violence incidents, the highest number on recent record. That total is three victims more than in 2017 and roughly triple the 2015 rate. So far this year, local authorities have recorded 15 deaths from domestic violence.

An overflow crowd at the Mennonite Fellowship Sanctuary listened as women shared stories of domestic abuse and offered suggestions on how to remedy what they called a growing crisis.

Democratic U.S. Reps. Joaquin Castro and Lloyd Doggett, who organized the event, offered brief opening remarks but said they were primarily there to listen. Republican U.S. Rep. Will Hurd and Democratic State Sen. José Menéndez, along with local judges and members of city council, were also scattered through the pews of the chapel.

"[Domestic violence] affects men, it affects children, elders, everybody," Patricia Castillo, director of women's advocacy group the PEACE Initiative, told the crowd. "But tonight's focus is going to remain on how it affects women in our community, because the women, as you well know, are the mainstay of the familia."

Castillo, a former social worker, urged local officials to simplify protective orders for battered women, create more room at shelters and to alleviate the fear many witnesses feel about coming forward to testify.

Following Castillo, two abuse survivors spoke about their experiences, leaving some in the audience visibly shaken by the stories.

Rena Castro tearfully detailed the death of her daughter Erin, 19, who was run over by boyfriend Joshua Garcia, who had a history of abuse that started with insulting and body shaming the teen when they dated in high school.

"I truly believe that through awareness, education and community outreach, we can make a change," Castro said. "Erin was so young and naive she didn't see the early signs of abuse before it was too late."

Lori Rodriguez, a Palo Alto College professor, told the story of a 2015 beating she received at the hands of a man she'd ended a relationship with. Despite the brutality of the incident, he received deferred adjudication rather than jail time.

"I was privileged in many ways," Rodriguez said. "If this was the best case scenario for me, I cannot imagine the experiences of women who are not citizens, who do not have an education, who do not speak English, who have children and are dependent on their abusers for support."

During his time at the microphone, Doggett said the national domestic violence hotline had its busiest year last year — a 36% increase in calls from the year prior. At the same time, 40% of women seeking shelter in Texas are turned away because of lack of space.

"San Antonio, in particular, of the major cities of Texas has the most problems with violence against women," Castro told the Current before the town hall. "And it's something that's not going to be solved by a particular politician or even one level of government, but by all of us."