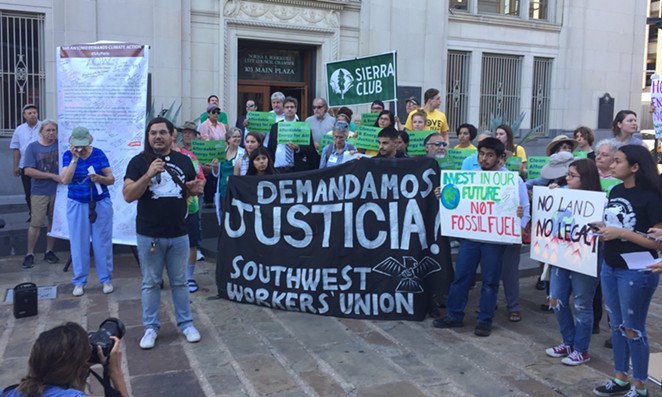 Jim Greenwood is the kind of guy a lot of big city mayors would want in their corner. The longtime political insider has worked for congressmen, served as chairman of the city’s largest chamber of commerce and done extensive lobbying for one its biggest employers.

But some of those things aren’t exactly assets prized by the progressive community whose grassroots support helped Nirenberg narrowly win re-election last month.

Some who supported Nirenberg say they feel betrayed that he named Greenwood, a former vice president of government affairs for refining giant Valero Energy Corp., as his new chief of staff following the victory. The mayor was already on shaky ground with environmentalists for postponing a vote on the city’s climate action plan after Valero objected.

Of further concern is a recent piece by Rivard Report columnist Rick Casey reporting that the mayor had been courting Greenwood, 58, for “weeks ahead of the runoff election.” Historically, chiefs of staff serve the powerful dual role of being both close advisors and personnel managers to the mayor.

“It’s been frustrating to know that, all along, we’d just get another political insider in that position,” said Graciela Sanchez, director of the Esperanza Peace and Justice Center. “It appears to be another effort to appease the business community.”

Environmental and progressive groups including the Texas Organizing Project, which threw its support behind Nirenberg in the runoff, said they’re withholding public opinion on Greenwood until they have face-to-face meetings with him. Even so, it’s easy to read the concern in some of the statements they have released about the staffing change.

“This decision was certainly a surprise and honestly, based on Valero’s knee-jerk reaction to the city’s desire to address climate change, a bit concerning,” Environmental Defense Fund Project Manager Mario Bravo said in a written statement. “But I’m hopeful he ends up being someone we can work with and accomplish good things with.”

Some of the surprise and anger, critics say, stems from Nirenberg telling supporters during last month’s victory party that he’d emerged from the campaign a “changed” man — something many read as signal he was willing to engage more directly with the progressive community.

While Greenwood spent roughly two decades at Valero, his political career began reaches back before that.

Early on, he worked for congressmen Mike Andrews and Greg Laughlin, both Texas Democrats — although the latter switched parties in 1995. And, as 2012 chairman for the San Antonio Chamber of Commerce, Greenwood helped build support for then-mayor Julian Castro’s Pre-K 4 SA program.

Since taking on his new role, Greenwood has been reaching out to progressive and environmental groups for meetings. Indeed, his ties with Valero could prove useful in swaying the company to drop its opposition to the climate plan, political observers point out.

Even so, his history doesn’t suggest he’s a natural ally for progressives.

Greenwood’s political contributions have largely flowed to Republican candidates, including $2,300 to Trump attorney and former New York mayor Rudy Giuliani’s failed 2008 presidential campaign, according to the nonpartisan Center for Responsive Politics. Among Greenwood’s other GOP political contributions were $1,250 to former Sen. Kay Bailey Hutchison and $500 to current Sen. John Cornyn.

The donations also include a one-time $250 gift to the Republican National Committee and contributions totaling $2,750 to the American Fuel & Petrochemical Manufacturers, a group that argued the federal Clean Air Act shouldn’t be used to regulate greenhouse gas emissions. In April, refiner Royal Dutch Shell cut its ties with AFPM over the group’s unwillingness to acknowledge climate change.

Greenwood has also voted in Republican primaries seven times since 2002, according to Bexar County election records. His only record of voting in a Bexar Democratic primary was in 2008, the year Barack Obama defeated John McCain. That year, Greenwood contributed $1,000 to McCain’s campaign, according to the Center for Responsive Politics.

Politics is politics, and it’s not unheard of for operatives to switch affiliations over the course of a career. But for activists like Esperanza’s Sanchez, there’s little in Greenwood’s record to inspire confidence that Nirenberg’s second term will differ from his first.

“It’s more proof that he’s more progressive as a campaigner than he’s been as a mayor or councilman,” she said.