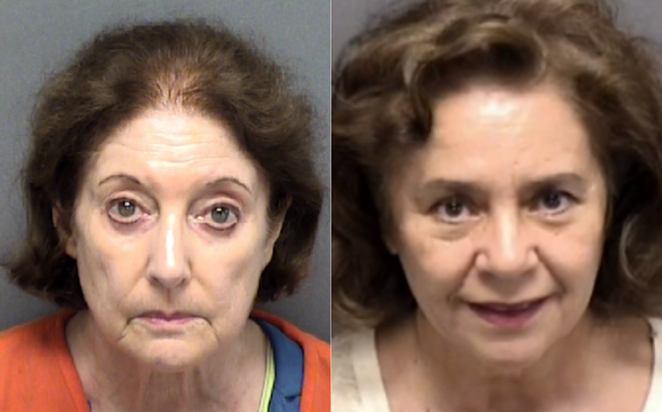 Lesley Wenger was taken into custody on felony charges of tampering with evidence and fraudulent use or possession of identifying information. Sylvia Gonzalez was charged with tampering with a government record.

The arrests are the result of an investigation of a meeting involving Wenger, Gonzalez, Rapelye, Castle Hills Mayor J.R. Trevino and a local law enforcement officer. The city manager said he asked Trevino and the officer to accompany him to the May 24 meeting given Wenger's "volatile history," according to an arrest affidavit.

During the meeting, KSAT reports that Wenger allegedly told Rapelye that Gonzalez wanted to see his personnel file, but it was actually Wenger who looked at the documents and even wrote notes as Gonzalez tried to distract him.

Rapelye then confronted Wenger, 77, about what he saw. She initially denied the accusation but eventually admitted she had examined the file. Trevino and the officer later supported the accusations as well.

The affidavit states that Wenger tore up the paper on which she had written Rapelye's Social Security number, driver's license, date of birth and even the name of a caseworker assigned to his daughter's child support case.

During an investigation into the incident, authorities learned that Wenger had once said her first order of business on the council would be to get rid of Rapelye and "put her friend Diane Pfeil back in the job." Pfeil was fired in July 2016 after two years on the job.

"Wenger launched a campaign of harassment and attacks upon Rapelye in an effort to either get him to resign or to create enough controversy to fire him outright," a detective said in the affidavit.

During a May 21 council meeting, Trevino said he received 26 petitions calling for Rapelye's removal. A resident later spoke up and said Gonzalez went to her home under false pretenses to get her signature on one of the petitions.

The day after that meeting, the petitions disappeared, according to authorities. Surveillance footage showed Gonzalez, 72, taking the documents and putting them in a binder, KSAT reports.

The accusations come after critics questioned the legitimacy of Gonzalez's swearing-in ceremony. They argued that Bexar County Sheriff Javier Salazar, who helped administer the oath of office, was not qualified to do so, meaning Gonzalez may not be legitimately serving on the council.

Gonzalez posted her $5,000 bail and has been released from Bexar County Jail. Wenger, however, remains in custody with a $30,000 bail.

Trevino, Castle Hills' mayor, issued a statement in response to the arrests.
See related PDF Castle_Hills_Mayor_Statement.pdf Stay on top of San Antonio news and views. Sign up for our Weekly Headlines Newsletter.