The Texas House Speaker Was Accused of Plotting Against Fellow Republicans. Here’s What We Know

by Troy Closson, The Texas Tribune 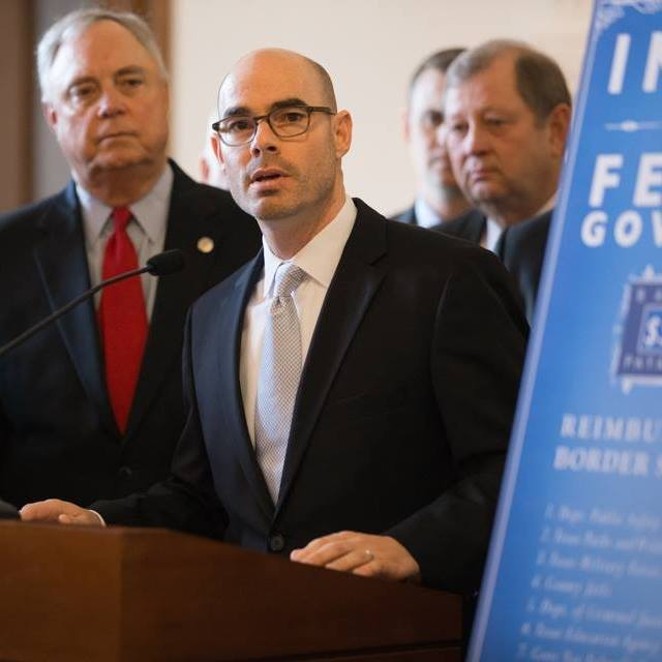 Republican House Speaker Dennis Bonnen met with hardline conservative activist Michael Quinn Sullivan in his office earlier this summer, after the legislative session. State Rep. Dustin Burrows, R-Lubbock, was in the room, too. No one denies the June 12 meeting happened — but their disagreement over what was said could have major implications for Texas, after two GOP lawmakers who heard the recording disputed Bonnen's account. Here’s what you need to know.

Who is Michael Quinn Sullivan — and what does he say happened?

Sullivan is the CEO of Austin-based Empower Texans, a nonprofit promoting fiscal conservatism with a well-funded political action committee. Last week, on his organization’s website, Sullivan posted his account of the June 12 meeting. Sullivan says during their meeting, Bonnen walked out and Burrows gave him a list of 10 GOP House members to target during the 2020 primary elections. In return, the organization's news site, Texas Scorecard, would receive House media credentials when the Legislature reconvenes in two years.

While Sullivan says he sent Bonnen a letter rejecting his offer, neither has released a copy of it.

Sullivan has threatened to release recorded audio of the meeting if Bonnen does not "recant the lies and misrepresentations he has made."

In a June 27 letter, Bonnen wrote that Sullivan had a “misimpression of our meeting” and that such a deal had never been offered. Although he didn’t directly address the allegation of a 10-member list, Bonnen again denied Sullivan’s account last Friday evening. In an email sent to House Republicans that was obtained by The Texas Tribune, Bonnen says the two ran into one another at a Houston airport, where he approached Sullivan, had “a short and curt exchange” and was asked to meet later.

At that meeting, Bonnen says, he and Burrows told Sullivan it would be important for Empower Texans “to not engage against House Republicans in the upcoming March primaries” and that if the organization did, it would have a “difficult time” qualifying for media credentials.

On Friday evening, Bonnen emailed House Republicans, disputing Sullivan's account of the meeting, and he further denied the allegations Monday — four days after the they surfaced. On Monday, Bonnen said the "true nature" of his conversation with Sullivan was getting lost within media narratives.

"Let me be clear," Bonnen said. "At no point in our conversation was Sullivan provided with a list of target Members."

For now, Burrows, who chairs the House GOP caucus, has stayed out of the matter and has not commented publicly since the allegations surfaced.

Who is on the alleged 10-member list of House Republicans?

The list of GOP lawmakers includes some House members who played key roles in the speaker's race of late 2018, including Travis Clardy of Nacogdoches, Drew Darby of San Angelo and Tan Parker of Flower Mound, according to Sullivan.

In his post last week, Sullivan wrote that Burrows said the list included those who voted against a proposal to ban the practice of taxpayer-funded lobbying — though Sullivan noted that if that were true, some lawmakers were missing from the list.

One name said to be on the list, Steve Allison of San Antonio, drew confusion since his campaign recently received a near $20,000 in-kind donation from Bonnen's political action committee for polling, according to a Texas Ethics Commission filing.

The other Republican House members on the alleged list are:
What do media credentials have to do with it?

House media credentials provide organizations like The Texas Tribune and The Dallas Morning News access to the chamber floor when the Legislature is in session. Texas Scorecard has long been denied those credentials because it is affiliated with a PAC that tries to influence legislation and elections. After the organization's application for credentials was turned down earlier this year — despite being approved in the Senate — the outlet sued the House Administration Committee chairman, arguing its rejection amounted to “unconstitutional viewpoint discrimination.” A federal district judge dismissed the case, and Empower Texans is appealing.

How have political observers and House Republicans reacted?

At the end of the legislative session, Bonnen told reporters that regardless of political party, he wouldn’t tolerate incumbents campaigning against other House members and warned of consequences if that were to happen. Many political observers suggested last week that Sullivan’s allegations were a fabrication.

According to people familiar with the matter who requested anonymity, a majority of the House Republicans on the 10-member list had spoken with Bonnen or members of his office by Friday afternoon and were told that Sullivan’s account is not true.

But after listening to audio of the June 12 meeting, two Texas House members disputed Bonnen's account.

“What I derived from the audio tape — it’s very clear — is that Speaker Bonnen was not truthful about a list not being provided," state Rep. Steve Toth, a Republican from The Woodlands, told The Texas Tribune after he listened to a recording.

Clardy, one of the GOP lawmakers who is said to be on the alleged list, told The Dallas Morning News what he heard is "consistent with" what Sullivan has alleged and that Bonnen made "disparaging" comments about members of the Texas House. Clardy added that, in the recording, Burrows mentioned House Republicans who could be targeted in the primary elections.

The recording has not been released to the public.

Where could this leave the GOP-controlled House?

Ahead of one of the most important election cycles in recent history, this could have major implications for Texas Republicans. State Rep. Jonathan Stickland, R-Bedford, told The Texas Tribune on Wednesday night that some Republican House members had privately discussed the possibility of meeting as a caucus to discuss the matter. Stickland has received large donations from Empower Texans’ political action committee toward his past House campaigns. After accounts from House Republicans who heard Sullivan's alleged recording of the meeting, Bonnen's future as the Republican House speaker could also be in peril. Stickland, who is not running for reelection in 2020, has called for his resignation.