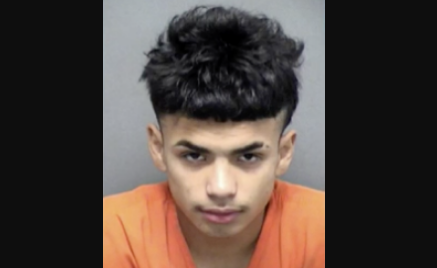 Warning: This article includes graphic content that may be unsuitable for some readers.

San Antonio police have arrested a teen who was seen slapping and punching a girl in a video shared to Twitter.

According to an arrest affidavit, 17-year-old Ernesto Barrera was arrested Saturday and charged with assault in connection with the August 5 video.

The video shows Barrera sitting in the passenger seat of a vehicle and turning around to hit a 15-year-old girl in the backseat who appears to be blacked out. KSAT reports that the video was sent to police multiple times, though authorities were initially unable to identify the teen being struck.

He is going to get what is comming to him . #viral pic.twitter.com/VsULAnHQ92

The victim reportedly went to police and said she was "possibly sexually assaulted around the same time as the assault," according to KSAT. She confirmed her identify by saying she's the one seen in the video and provided contact information for the girl seen in the driver's seat.

KENS 5 reports that the teens in the car are students at Jefferson High School, though the school district has not confirmed this information.

Apparently his name is Ernesto Barrera, a student of Jefferson High School in San Antonio. Call the school, call the district, call the authories. What a sick individual. Including the passengers. https://t.co/tKARoRYBEH

I contacted Jefferson high school and the receptionist advised me that they have turned over video and information to the authorities.

The girl behind the wheel later authorities that "she was the only person sober enough to drive." The driver also said that the victim had a mixture of Xanax, alcohol and marijuana in her system, leading her to black out. When the vehicle full of teenagers stopped to get food, the victim reportedly didn't wake up, at which point Barrera began attacking her.

In the video, the teens in the car can be heard laughing as Barrera beats the victim. Later, some passengers told him to "chill."