The last time Assistant City Manager Lori Houston spoke to city council about a major housing initiative was in December, when the council was considering changes to the downtown housing incentive policy, a developer-friendly program that’s on track to yield about 6,800, predominantly market-date, units to the center city.

On Wednesday, Houston switched housing gears and presented the council with a $34.5 million, multi-agency affordable housing strategy as part of the fiscal year 2020 budget process.

The multi-pronged strategy is estimated to produce or preserve 18,681 affordable units — as well as help families attain or remain in affordable housing — across San Antonio in the next 10 years. The benchmark was established by the Mayor’s Housing Policy Task Force in its framework report released last August.

At the heart of the plan is what’s called a coordinated housing system — in which relevant city departments, outside agencies, such as the San Antonio Housing Authority, and nonprofit organizations, will get on the same page when it comes to affordable housing in San Antonio.

The plan introduces new programs, such as tax abatements for eligible homeowners, and a vacant home rehab program, in which the city owns the home while it’s being fixed up; and it tweaks existing programs, such as requiring much lower rents from developers in pursuit of 4 percent low-income housing tax credits.

It also coincides with the city’s national search for a chief housing executive, which it will soon launch — another goal outlined in the task force’s report.

“I’m glad where we’re now at— the moment where the city has truly recognized the priority it has placed on housing, and is acting accordingly,” Mayor Ron Nirenberg said. “The truth of the matter is, this whole effort could have been done 30 years ago, but it wasn’t.”

It was difficult to get specific reaction from local housing players and advocates because the plan is still being disseminated. We’re still sifting through the numbers ourselves.

Wednesday's presentation served to contextualizes this massive plan with current and past efforts. Some have praised the plan for having the same kind of ambitious scope as the downtown housing incentive policy.

Others have criticized its timing and use of some public dollars.

For now, here’s what the plan says.

[ View a presentation Houston gave to the Housing Commission on July 31. ] 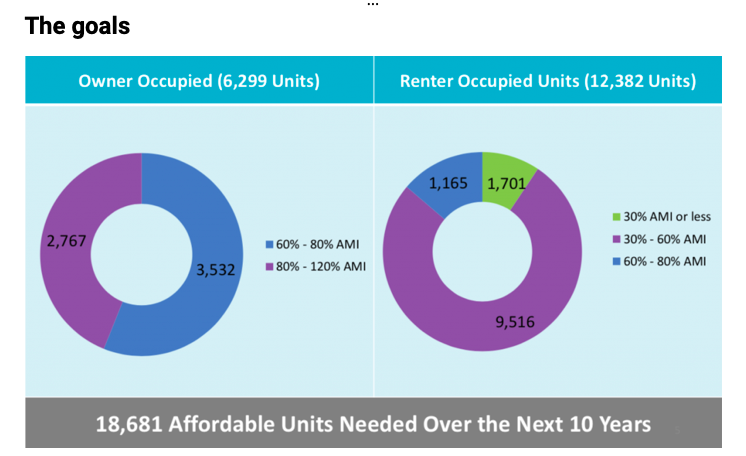 The goal is to create or rehab 18,681 units citywide by 2029. Here’s how that figure breaks down by area median income (AMI):

At a recent Housing Commission meeting, Houston said the city and its partners are on track to meet these goals, except for the production of apartments for residents making 50 percent AMI or less, which is $35,500 for a family of four in the greater San Antonio area.

“We’re going to be OK with our goals if we continue to get $26.1 million every year,” Houston said told the commission in regards to the affordable housing budget this fiscal year. “But we’re not going to see it in the areas that we want to see it.”

One strategy for attaining more units at those lower price-points, she said, is to require them from developers seeking city support during the application process for 4 percent low-income housing tax credits, a federal program in which tax credits are sold to investors in exchange for cash to build the housing.

The city’s preference is for the housing to be created in or near the 13 regional centers and along the transit corridors identified in the SA Tomorrow planning process.

Of the $34.5 million cost, $29.6 million will come from the city, and $4.9 million from outside partners. A big player is the nonprofit Local Initiatives Support Corporation (LISC) San Antonio, which will provide loans for some of the construction and rehab programs.

Jim Bailey, an associate principal at Alamo Architects, who served on the task force, said reaching the 18,681 benchmark helps reverse the negative affordable housing trend in San Antonio — in terms of lack of new housing and deteriorating housing stock — but doesn’t solve it.

“The problem is too big to solve, but we can keep it from getting worse until such time we have the infrastructure in place in terms of city staff and institutions to do larger and larger bonds to be able to reverse the trend,” Bailey said.

It’s important to note that aspects of the affordable housing plan were launched last year.

The city estimates 4,460 affordable housing units were catalyzed in the current fiscal year, which began Oct. 1. The majority of those units — 3,025 — were products of the housing tax credit program; and the San Antonio Housing Trust, a nonprofit created by the city, which has the power to offer full property tax exemptions and issue bonds for affordable housing projects. Five members of the city council, representing Districts 1 through 5, serve as the trust’s board of directors.

[ Note: Another of the task force’s recommendations was to study the San Antonio Housing Trust, which has been criticized by housing advocates for its lack of transparency in the deals it strikes with developers, who save millions of dollars from not having to pay property taxes on the projects it builds with the trust. The final report hasn’t been released, but here’s a copy of the executive summary. ]

From a bird’s eye view, $1.09 billion in incentives have been given to 92 affordable housing projects scheduled for completion this year and beyond, according to city estimates. The largest chunk of those dollars, $373 million, comes in the form of housing tax credits. Another $299 million is the savings housing trust partnerships receive by not paying property taxes—an incentive made possible under state law in exchange for renting half the units to households making 80 percent AMI or below; or by reserving 20 percent of units for public housing.

In order to reap the benefits of the property tax exemption, the housing trust must create a nonprofit entity called a public facility corporation, or PFC, which also has the power to issue tax-exempt bonds for the purpose of building affordable housing. From the $1.09 billion in incentives, another $286 million comes from bonds issued by the housing trust’s PFC.

Here’s a basic explanation on how PFCs work:

By comparison to the $1.09 billion in affordable housing incentives, the city estimates it provided $84 million in incentives under its Center City Housing Incentive Policy for 56 projects that have signed agreements. The bulk of that total is $67.6 million in rebates the city provides on its share of property taxes.

The city’s affordability goal for the upcoming fiscal year is 5,465 units — 4,529 of which would be the creation of new housing, 571 rehabbed housing and 165 in the form of homebuyer assistance.

The remaining 200 would be counted as people on the verge of being displaced, or who are in the process of being uprooted, aided by the city’s anti-displacement policy.

That effort began late last year with public meetings. During that process, many who attended the meetings criticized the plan for not addressing the root causes of displacement. In March, the city council allocated $1 million to the program.

Earlier this year, NHSD began to address the root causes of displacement by looking at a statewide program called Neighborhood Empowerment Zones, in which eligible homeowners can receive an abatement on the city portion of their tax bill for up to 10 years. Officials said they will identify which neighborhoods to first apply the designation, and the impact the program will have on the city budget, and present the plan to the council during the budget process, which begins this week.

Community groups like COPS Metro Alliance have pressured Nirenberg and city officials to expedite and strengthen some of these programs.

For the sake of brevity, a concept that’s already been abandoned in this piece, we won’t go over every single program under the new strategy. But here are some highlights:

» Single-family rehab pilot program: The city would purchase vacant homes and partner with Habitat for Humanity or Merced Housing Texas to rebuild them, while LISC provides the construction loan. The homes would sold to households making between 60 and 120 percent AMI. SAHA, coincidentally, has 69 homes across the city it’s looking to sell. In recent weeks, Houston and SAHA President David Nisivoccia have both talked about the homes being sold to the city of San Antonio.

» Accessory dwelling unit pilot program: Would require a change to the Unified Development Code to allow homeowners to build detached units on their property, which would allow them to live on their property while renting the main house for additional income.

» Sale of city property: The estimates it can yield 450 affordable units by selling four properties: the former marina on Nueva Street at the river; the former Continental Hotel building on West Commerce Street; property on South Cherry Street; and land on Zarzamora Street.

That’s the plan in a nutshell. A very large nut. There are details and concepts, for the sake of the average attention span, I didn’t broach in this piece. I still have many questions myself. Hopefully, this piece gives you a basic overview of the plan. Tomorrow, more about what the plan means, and what people think of it so far.