The day before a shooter at an El Paso Walmart carried out the deadliest attack on U.S. Latinos in recent memory, Gov. Greg Abbott’s campaign's mailed out a fundraising letter urging fellow Republicans to “DEFEND TEXAS NOW” from immigrants and “take matters into our own hands.”

The letter, dated August 2 — the day before the shooting that left 22 people dead — uses alarmist language to depict a flood of immigrants poised to overrun Texas and help the "national Democrat machine" turn the state blue.

"‘Unless you and I want liberals to succeed in their plan to transform Texas — and our entire country — through illegal immigration, this is a message we MUST send," Abbott's letter says.

Abbott's claims are alarming to observers because they appear to mirror those of the 21-year-old shooting suspect, who claimed in an online screed that the shooting spree was his response to a "Hispanic invasion of Texas” that would shift the state's political climate. 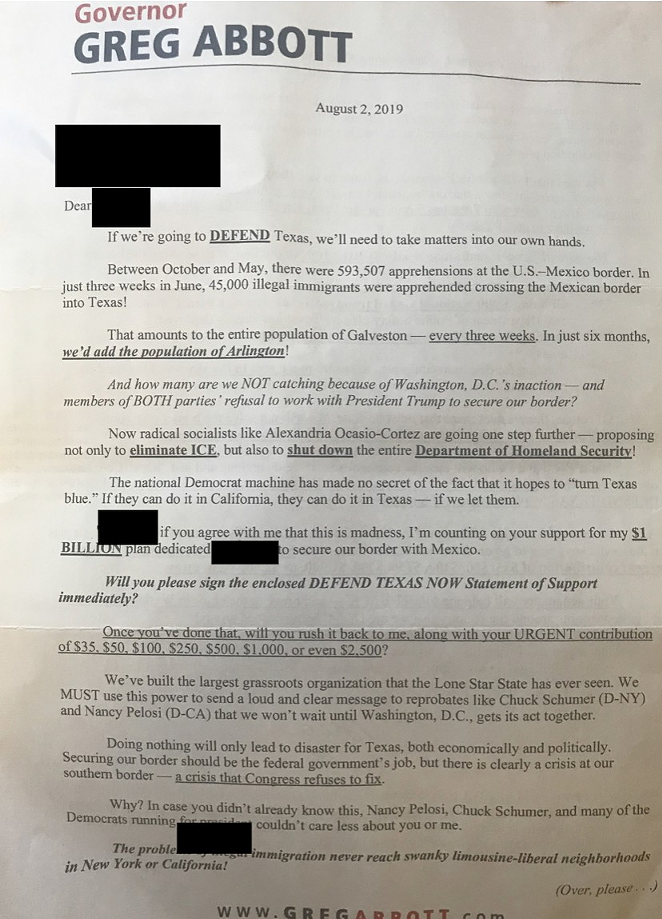 Democrats also pointed out the similarities between Abbott's letter and the escalating anti-immigrant rhetoric of President Donald Trump, who has called Mexicans "rapists" and "drug dealers" and claimed migrants from "shithole countries" are overrunning the United States.

"Despicable doesn’t even begin to describe Governor Abbott’s racist, anti-Latino, anti-immigrant letter sent one day before the El Paso shooting," said Texas Democratic Party Executive Director Manny Garcia.  "There is no difference between Donald Trump and Governor Greg Abbott’s toxic rhetoric of racial grievance. This kind of rhetoric fueled the hatred of a terrorist who drove ten hours to murder members of the Latino community."

Abbott's office had no immediate comment at press time.

Of course, Abbott isn't the only Texas politician to take fire for engaging in anti-immigrant rhetoric.

Lt. Gov. Dan Patrick has faced backlash for a long history of anti-immigrant statements likening immigrants crossing the border an “illegal invasion” that carries “Third-World diseases." A Fort Worth-area Tea Party official with ties to Patrick also made headlines this week for an online post referencing the same "replacement theory" cited by the El Paso gunman.

“This is not a game," said Solis of the Texas Democratic Party. "It’s long past time for Republicans to eradicate white supremacist language from their discourse — people are dying.”