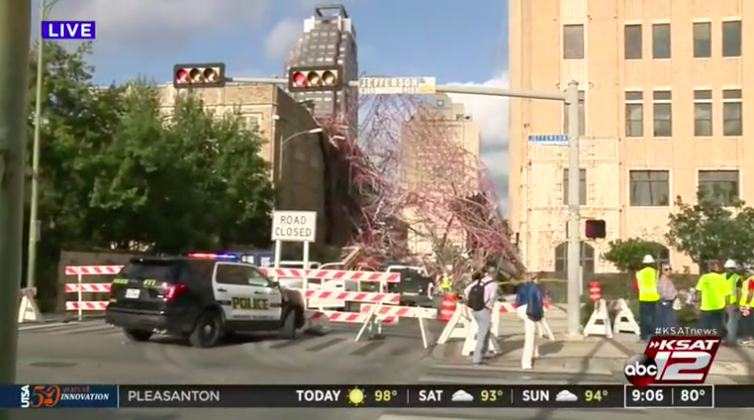 Winds from Thursday night's severe weather collapsed 16 stories of scaffolding on a building in downtown San Antonio, according to reports.

San Antonio Fire Chief Charles Hood spoke to reporters at the scene and said winds blew down a section of scaffolding outside an AT&T building, raining debris onto the 300 block of Martin Street around 9:30 p.m. Thursday.

A man, woman and child sitting on a bench in the area reportedly suffered minor injuries as they ran from falling detritus. Hood said the city could have been responding to more serious injuries had the storm hit earlier in the day.

The collapse damaged St. Mark's Episcopal Church and crushed cars parked on the street. No one was inside the church at the time of the incident. Due to the extensive damage, the church will be closed until further notice, said Rev. Beth Knowlton.
A section of Martin will be closed until first responders are able to remove the 16 stories of scaffolding, which Hood said will be a "lengthy process."