Four years to the month after city council approved an incredibly complex real estate agreement between the city, Weston Urban and Frost Bank that gave San Antonio’s skyline the 24-story Frost Tower, the bank’s employees started moving in. That was in June.

Save for a few lingering matters — punch list items, leasing the rest of the office and retail space, and, perhaps more importantly, the grand opening celebration in early October — the tower is done, Weston Urban President Randy Smith said.

Now, Weston Urban, the local development company backed by Rackspace co-founder and philanthropist Graham Weston, shifts its attention to housing, the part of the agreement overshadowed by the tower, but which plays perhaps the more significant role in the transformation of west downtown. The company owns several parcels ready for development, and other properties outside of the agreement, such as The Rand (home to Geekdom) and the Milam building, which will undergo rehabilitation next year.

[Note: When I say this deal is complex, I’m not joking. The details have faded over the years, but this article I wrote in 2015 for the San Antonio Express-News captures most of the partnership’s nuance. Or, read the signed agreement.]

In the partnership, Weston Urban is obligated to build at least 265 housing units on nearby properties it purchased, or will purchase, from the city and Frost Bank. Those properties are the Municipal Plaza Building, 114 W. Commerce St., the original Frost Bank building where City Council now meets; the San Fernando Gym, 319 W. Travis St.; three parking lots in the area; and the green space east of the new tower which Weston Urban is currently redeveloping into a more useful park space. It’s worth noting that Weston Urban also received an incentives package worth $3.9 million in city and SAWS fee waivers for the office tower and new apartments.

Smith said the company’s housing production will go beyond the 265 units.

“We will far exceed that,” Smith said. “We will build multifamily down here until the market tells us to stop. We have the land. We have the development pipeline.”

As previously reported by the Heron, Weston Urban has been acquiring more properties of late, in particular the historic Toudouze market property at 700 W. Houston St., and a two-story office building on the 600 block of Dolorosa.

These developments, Smith said, will complement the expansion of the University of Texas at San Antonio, a massive effort that will quadruple the size of its campus in the western part of downtown. 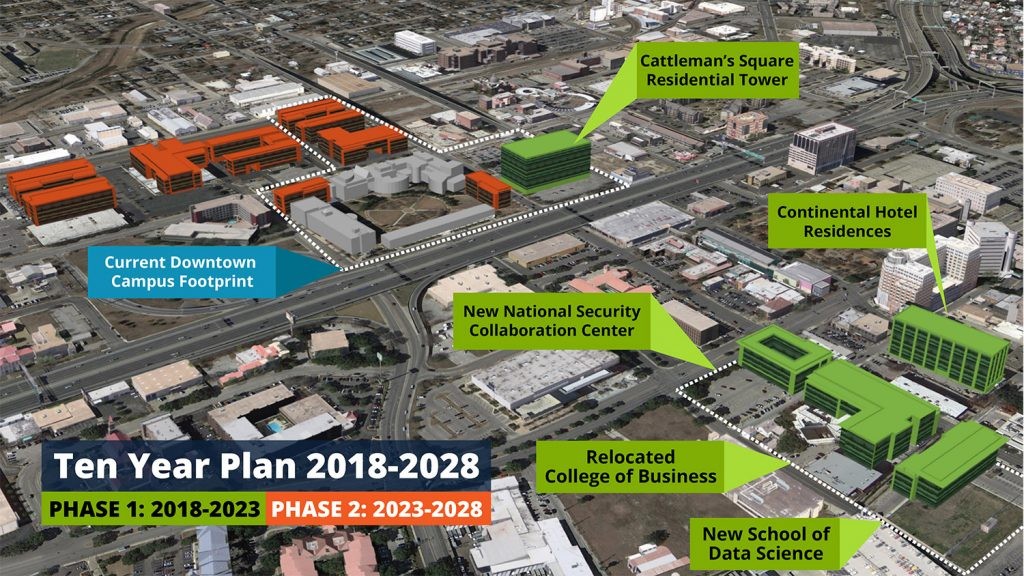 There are other players, other developers with plans to add more housing, retail and office space. And that’s just what’s being planned now. In 10 years, this once vibrant, predominately Mexican-American part of downtown will look vastly different — a transformation perhaps more jolting than the one that occurred on Broadway the past eight years.

This growth undoubtedly is heading in the direction of the predominately under-served and neglected West Side of San Antonio. This is an extremely complex pattern, one in which we’ve examined previously, and which we will continue to discuss in upcoming stories.

Smith said the company plans to build a mix of housing types at different rent levels. He said Weston Urban will seek development partners and incentives for some of its projects in this area.

In May, officials with UTSA and Weston Urban visited Arizona State University’s campus in Phoenix, which is known as one of the more vibrant downtown campuses in a big city. The trip was intended to spur ideas about what works and what doesn’t on an urban campus.

Weston has donated $15 million toward UTSA’s School of Data Science, a brand new building that will be located on Dolorosa, a stone’s throw south of City Hall. UTSA will build two more academic buildings on Dolorosa, as well.

“Of course, Graham’s philanthropy has done a lot to get the School of Data Science off the ground, but we’ve been down here investing in downtown for the better part of a decade.”

These are the knowns. When you start to look at the known-unknowns, it’s enough to make one’s head spin.

UTSA will seek a developer to build apartments on a two-acre parking lot it owns just north of the campus, just east of Pico de Gallo restaurant, west of Interstate 35. According to documents filed to the state by UTSA, the apartments would be for the general public, not just students, faculty or staff.

Nonprofit developer Alamo Community Group is planning the Cattleman’s Square Lofts near UTSA, and VIA Metropolitan Transit wants to build its first residential development inside the abandoned Scobey complex.

More immediate is the former Continental Hotel on West Commerce Street, which the city is putting up for sale.

The sale comes with one main stipulation: that it be rehabbed into mixed-income housing. The Continental Hotel, because of its location on West Commerce Street, is a major puzzle piece in the redevelopment of the area.

“On the Continental, we’re really excited to take a good hard look at the (solicitation process) and see whether it could be a good fit for us,” Smith said.

The company will begin moving on its housing plans and the rehab of the Milam building in 2020, he said.

The San Antonio Heron is a nonprofit news organization dedicated to informing its readers about the changes to downtown and the surrounding communities. Stay on top of San Antonio news and views. Sign up for our Weekly Headlines Newsletter.