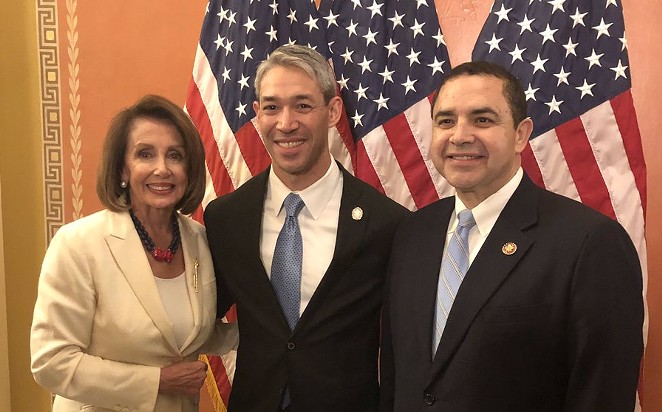 The potential shakeup comes as Democrats aim to turn the traditionally red state purple and could make it harder for the party to present a united front.

"It will be interesting to see all how this resonates with voters, especially in the primaries," Crockett said.

U.S. Rep. Henry Cuellar, a moderate South Texas Democrat cautious on impeachment, now faces a primary challenge from the left by attorney Jessica Cisneros. Earlier this week, Cisneros announced that Cuellar needs to "put his constitutional duty ahead of his support for Trump."

After Nancy Pelosi initiated the House's formal inquiry, Cuellar said in a statement that he remains cautious, but "if investigations prove that impeachment is the necessary course of action, then I will be forced to act on impeachment proceedings."

"I suspect this is him trying to calibrate carefully," Crockett said of Cuellar's statement.

Former state Sen. Wendy Davis, running against GOP incumbent Chip Roy in San Antonio and the Hill Country, voiced support for the inquiry in a press release. However, in what appears like an appeal to moderates, she added that once the matter is complete, Congress should "immediately" pivot back to issues such as health care, drug prices and education.

Impeachment could also end up as a wild card in the race to fill the San Antonio and border-area seat left open by the pending retirement of Republican U.S. Rep. Will Hurd, Crockett said. Democratic frontrunner Gina Ortiz Jones faces primary challengers to represent the district, which flips frequently.

Both the divisiveness of the rhetoric surrounding impeachment and the inquiry's likely duration all but ensure it will remain a top 2020 issue, the Crockett added.

"I don't see anything about this process that suggests it will be over quickly," he added.