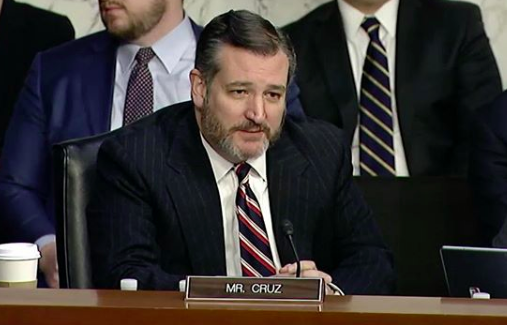 Is it just us, or has Texas Sen. Ted Cruz been uncharacteristically bipartisan recently?

First the normally acid-tongued arch-conservative agreed to work with Democratic U.S. Rep. Alexandria Ocasio-Cortez on reining in lobbyists. Then he had a surprisingly civil meeting with actress and activist Alyssa Milano about gun control.

Now Cruz has once again joined forces with Ocasio-Cortez — who, lets face it, is pretty much his political polar opposite. This time, the pair signed a letter calling out the NBA for what they consider its willingness ass-snorkel Chinese authorities instead of standing up for free speech.

In the letter issued Wednesday, eight lawmakers said the league "has caved to Chinese government demands for contrition" in the way it defended a tweet by the Houston Rockets' general manager showing support for pro-democracy protesters in Hong Kong.

Critics have charged NBA chief Adam Silver has put up a wishy washy defense of free speech for his employees while putting in overtime to smooth things over China, one of the league's most lucrative markets.

"We are deeply concerned that individuals associated with the league may now engage in self-censorship that is inconsistent with American and the league's stated values," the letter reads.

The letter also warns that the incident could encourage China to engage in future intimidation of U.S. businesses and people.

It's hard to know Cruz's precise motivation for his newfound willingness to reach across the aisle. But we've got to wonder how much of it stems from him almost losing his seat to an upstart rival who preached bipartisanship.