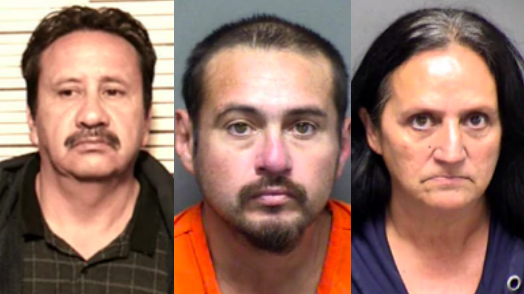 Three people have been arrested after a teen girl told police that a man raped her while his father and stepmother were in the room.

According to a KSAT report, a 15-year-old girl told Balcones Heights police that she and a friend, also underage, were staying with Jared Jauregui at the Siesta Motel on Fredericksburg Road. She said the 40-year-old gave them drugs, including methamphetamine.

Police said the victim appeared to be "under the influence" when she made her report Wednesday.

After some time, Jauregui forced the girls to have sex with him, saying that if they didn't, he'd throw them out of the motel, according to the report.

The victim told police Jauregui took her and the other girl into a closet to rape them. The girl said that the suspect recorded the assault on his cell phone.

The girl said that two other people were inside the motel room at the time of the assault. The KSAT report identifies those individuals as the suspect's father and stepmother, Pete Jauregui and Maria Rios.

Jared Jauregui is now facing two counts of sexual assault. Pete Jauregui and Maria Rios have been charged with failure to stop or report an aggravated sexual assault of a child.