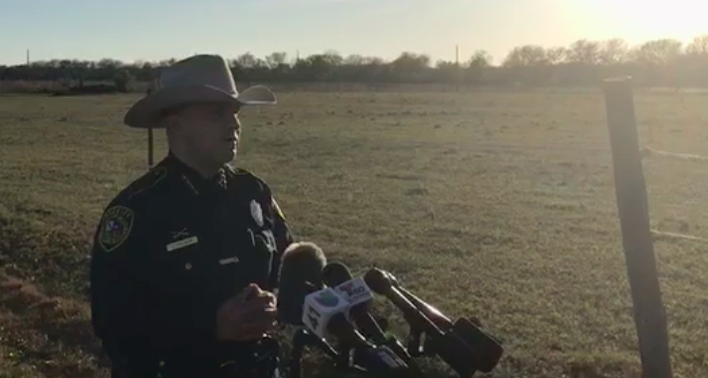 Multiple reports reveal that a charred and partially decomposed body was found Tuesday afternoon on a plot of land in the 12000 block of Wisdom Road, near the Atascosa-Bexar county line. KSAT reports that the property owner made the discovery while plowing his field.

Investigators at the scene believe the remains could have been placed there two days ago. The site is accessible via a dirt road from Wisdom and is past a wooded area, the Express-News reports.

Sheriff Javier Salazar spoke to reporters at the scene, saying that the remains were "very small in stature," but added that the burns were so severe authorities couldn't immediately determine whether the victim is a child or adult. He also said the gender could not yet be determined.

"It could be a child," Salazar said. "It's most likely a small adult or a larger child."
Salazar didn't provide additional details about the crime scene, such as a description of the clothing found with the body. Authorities will now check missing persons databases to help identify the victim.

The Bexar County Sheriff's Office is encouraging anyone with information, especially those who have seen suspicious activity in the area, to come forward by calling (210) 335-6070.