Now We Get It, Senator Cornyn! Kiss Enough Ass, and One Day You Can Help Your Constituents 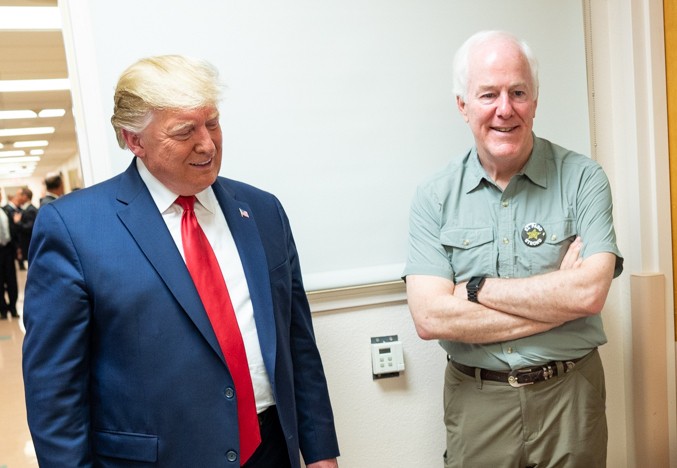 Editor’s Note: The following is Current Events, a column of opinion and analysis.

Sen. John Cornyn, forgive us voters of Texas if we’ve seemed skeptical during your nearly 18 years in office. Some of us still aren’t sure what you actually stand for. After all, you seem to have reinvented yourself more times than David Bowie.

In 2002, plenty of us figured you’d be the perfect fit for Phil Graham’s vacated Senate seat. Back then, you were the sensible chamber-of-commerce Republican with the law degree and the hearty endorsement of President George W. Bush. We’re sure your nice suits, square jaw and stately demeanor also had some part in closing that deal.

You managed to stay with that look for a while, although the “stately” part sure took a hit when you aired your “Big Bad John” TV spot in 2008. Face it, you look more comfortable in starched shirts than rustler duds. We know you dusted that ad off again at a recent GOP gathering, but let’s just call the cowboy getup a failed experiment.

But let’s not obsess over it. After all, it wasn’t long before your next reinvention. That came in 2014, around the time a bathroom-obsessed talk radio host was elected lieutenant governor of your home state. You faced a primary challenge then from one of those upstart Tea Party folks. Your opponent was as fringe as fringe gets, but just to make sure you stayed right where you were, you swung hard right — and fast as green apples through a goose.

Once a vocal immigration reformer, you helped sandbag a Senate bill aimed at doing just that — one crafted after months of bipartisan negotiation. And you didn’t stop there. You blew apart years of Senate norms by joining the filibuster against confirming Chuck Hagel as defense secretary. In yet another middle finger to bipartisanship, you even voted against confirming fellow senator John Kerry as secretary of state.

And, now, we’ll be consarned if you haven’t reinvented yourself yet again. Sometime after President Donald Trump’s surprise victory, you traded in your “Big Bad John” Stetson for a MAGA gimme cap. We’d wager you even bought the T-shirt too. Few senators have been as eager as you to go on camera and offer up fawning defenses of the president — even as so much evidence of his abuse of power and obstruction came to light.

It was no surprise you voted to acquit — after all, you’re no Mitt Romney. But you were so steadfast in your support that you didn’t even hedge with a verbal wrist-slap for your new BFF.

In their haste to play both sides, fellow Republicans Lisa Murkowski and Lamar Alexander decried the president’s actions “shameful and wrong” and “inappropriate.” But there were no such half measures for you, Sen. Cornyn. On a recent call with reporters, you refused to grant Trump anything but a sparkling bill of moral health. “[I]t would be wrong, just like it would be wrong in a court of law, to acquit somebody charged with a crime and then to go on to disparage their activity or character,” the Dallas Times-News quoted you saying.

At first, we wondered whether that statement displayed a little too much willingness to ass-snorkel the commander in chief.

But then we got it, Sen. Cornyn! Your willingness to say or do absolutely fucking anything to get reelected is all part of a grand scheme to finally win big for your constituents.

We’ve heard pundits from both sides of the aisle point out that you don’t really stand for anything aside from keeping your seat. We’ve heard critics say you’re lying through your teeth when you say the big, bad Democrats are stopping you from doing anything about protecting the healthcare of Texans with pre-existing conditions.

We now realize what a savvy mover you truly are: if you can just hold on long enough, you can take your other good buddy Mitch McConnell’s job. After all, you’re his lieutenant, and how many more times can he dupe the people of Kentucky into voting for him? Failing that, maybe you could pull a cabinet seat out of the president for whom you’ve shown such unyielding loyalty.

Yes, it’ll be from a position of real power that you finally start doing things for your constituents, Sen. Cornyn. Like helping some of us get health coverage. After all, we are the most uninsured state in the nation. Or maybe you could take stab at immigration reform once it’s safe for you to stop defending your boss for locking up kids in cages.

We’ll keep waiting, Sen. Cornyn. Until then: God bless, good luck, and remember to throw a few scraps our way once you reinvent your way to the top.