Bicyclists are Being Killed Among San Antonio's Most Congested Areas, Study Finds 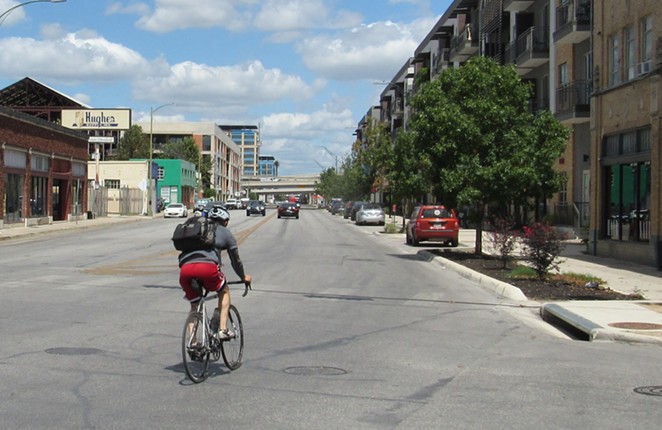 San Antonio citizens are processing yet another bike fatality this week, this time a 10-year-old girl who was struck on her way to school early Thursday morning.

Irie Suarez, a fifth grade student at Kallison Elementary, reportedly veered into oncoming traffic before she was hit. Bexar County officials say the weight of her backpack may have caused Suarez to swerve and lose control of steering.

The accident occurred around 8 a.m. near Ranch View East and Remrock Valley, in San Antonio’s far West Side, a neighborhood cornered by a roadway deemed the 11th most congested in San Antonio, according to 2018 data from the Texas A&M Transportation Institute.

The data showing the most congested roadways in Texas pointed to a correlation between heavily trafficked areas and cyclist fatalities. Three cycling deaths in the past year happened in the top 16 most densely populated transportation areas of San Antonio.

The Culebra Road, also called FM 471, stretch from Galm Road to Northwest Loop 1604 was identified as one of these areas. Kallison Elementary, on Ranch View, is less than half a mile away from Culebra Road.

Development plays a major role in road congestion. Valley Ranch neighborhood, where Suarez lived and commuted to school, lies on the fringes of Government Canyon State Natural Area. An urbanization swell — housing developments, shopping centers and new attractions like Flix Brewhouse — have taken suburban neighborhoods in the far West Side to the brim of the preserved forest.

“Kids should be able to get to school safely,” executive director of Bike San Antonio, Bryan Martin told the Current. The action group has advocated for clear, protected bike ways on Broadway, and corridors leading to the major street. “We don’t encourage our kids to ride their bikes to school, because we are afraid they are going to get killed.”

Since 2010, cycling deaths have increased by 25%, making San Antonio the 16th most deadly U.S. city for bicyclists, according to the U.S. Department of Transportation Fatality Analysis Reporting System.

Related San Antonio Is the 16th Most Deadly U.S. City for Bicyclists

These deaths turned heads toward SA’s infrastructure shortcomings, stirring conversations between city and cycling officials to improve means for multi-modes of transportation to safely commute together. Last year, the city came up with ConnectSA to address the congested roadways through a projected growth of one million people by 2040.

Related In the Balance: Leaders Say the ConnectSA Plan Isn’t an Either-Or Proposition. That May Be a Hard Sell to Voters.

In the Balance: Leaders Say the ConnectSA Plan Isn’t an Either-Or Proposition. That May Be a Hard Sell to Voters.
By Sanford Nowlin
The Daily
The plan, aimed at making San Antonio less car-centered, proposes 40 miles of dedicated, protected bike lanes. Martin, however, said he'll believe it when he sees it. “The cycling community is tired of lip service,” he said. “We want infrastructure that works with our green spaces and also gets you to schools and university safely.”

But as development increases across the city, already congested roadways present danger to vulnerable commuters like pedestrians and cyclists.

The location where Bradshaw was hit ranks as the second-most congested area in San Antonio. He was one mile east of this area — I-35 and I-10 from U.S. 281 to U.S. 90, or downtown — on the night he was killed. The spot is marked by a white ghost bike hanging from a pole in the 1900 block of E. Houston, as a tribute to Bradshaw’s life.

Related In Memoriam: Saying Goodbye to the Innovators, Creators, Movers and Shakers San Antonio and Texas Lost in 2019

In Memoriam: Saying Goodbye to the Innovators, Creators, Movers and Shakers San Antonio and Texas Lost in 2019
By San Antonio Current Staff
The Daily

When it comes to cyclist safety in fast growing areas cluttered by cars, Martin said things need to change.

“Two things need to happen,” Martin said. “We have to fix the lack of bike infrastructure and we have to reach out to the car culture and tell them to slow down.”

For now, he urges cyclists to wear their helmets, use plenty of bike lights and be safe out there.