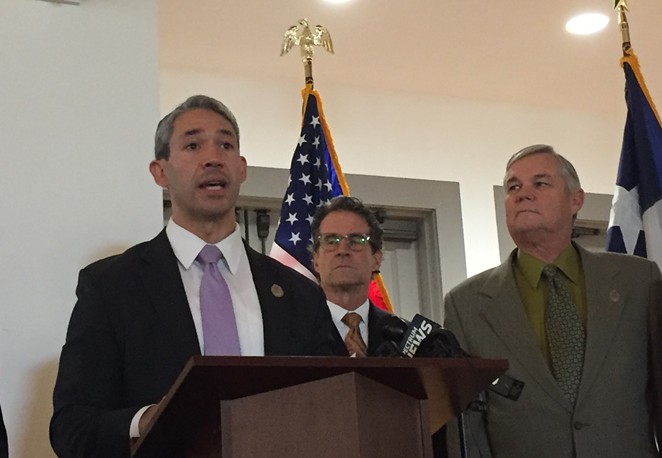 San Antonio Mayor Ron Nirenberg has unloaded on the Trump administration in the Washington Post, saying federal officials blindsided the city with its request to quarantine COVID-19 patients here.

“It’s disconcerting,” Nirenberg said in the article posted Monday night. “Throughout the course of this, what I’ve seen is that the lack of coordination at the highest levels of this president’s administration is simply stunning.”

So far, federal officials have quarantined more than 200 people at Joint Base San Antonio-Lackland. Another group of evacuees is expected this week.

Local officials in nearly every U.S. location that accepted novel coronavirus evacuees told the Post they were surprised by the sudden federal quarantine requests. What's more, they were "alarmed by the lack of information and exasperated by haphazard protocols," the paper writes.

When a second influx of evacuees arrived in San Antonio last month, city officials were told to have seven ambulances waiting on the tarmac and at least seven isolation rooms ready for patients who tested positive for the virus.

“Don’t we get to say no? What happens if we say no?” Assistant City Manager Colleen Bridger asked federal officials, according to the article. “They told us, ‘This is happening, so figure it out.’”

Early this month, local leaders' frustration was compounded when the Centers for Disease Control released a woman who later tested positive for the coronavirus and she visited North Star Mall. After the incident, Nirenberg and Bexar County Judge Nelson Wolff declared a state of emergency and requested a temporary restraining order to extend the quarantine.

A federal judge appointed by Republican President George W. Bush denied the request, but there has been one significant federal concession since then, the Post notes.

Texas health department spokesman Chris Van Deusen last week confirmed that in situations where an evacuee has an inconclusive test, the CDC will now require two subsequent negative tests before ending their quarantine.